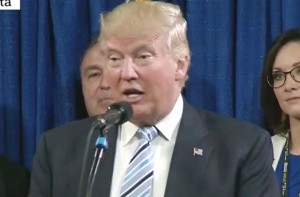 I was one of the most outspoken pundits regarding why Donald Trump was extremely unlikely to be elected president. I never thought he would get completely blown out, but I didn’t see a plausible path to 270 Electoral College votes unless we were all making several bad assumptions, and he also got very lucky (both happened). While the votes were still being counted I immediately ate crow for being very wrong about the ultimate outcome, but that doesn’t mean that Trump now gets to rewrite the history of what really went down for his own selfish purposes.

On Sunday’s “60 Minutes” Trump tried, at least twice, to laughably boast that he won “very easily.” While the final Electoral College margin is likely to be a healthy 306-232 (which is basically what I thought it would be in the opposite direction), this claim is obviously ludicrous, even by Trumpian standards.

If only a little over 100,000 more Democrats, combined, showed up in Pennsylvania, Michigan, and Wisconsin (states where about 14 million people voted in total) Trump loses. If the same number showed up only in Florida, then we are currently in a Bush/Gore recount situation in multiple states.

By any rational measure, even without consideration of the popular vote, this was an extremely close election. When your own people are telling CNN after the polls close that it will take “a miracle” for you to win, you don’t get to claim, in a remotely rational world, that that you won “very easily.”

Now that the dust has settled, it is now clear that Trump didn’t really “win” this election as much as Hillary Clinton lost it. Trump is likely to end up getting, at best, almost EXACTLY the same overall vote totals and percentage (as, interestingly, he did in many of the GOP primaries) as Mitt Romney did in 2012.

Importantly, there were only two key states where Trump significantly outperformed Romney. Florida, where having Marco Rubio on the ballot, in a very ironic twist, clearly helped get GOP-friendly Cubans to the polls. And Pennsylvania, which, in another irony, happened to be the subject of the only conversation/communication I have ever had with Trump thanks to his occasional support of former Penn State football coach Joe Paterno.

To be clear, Trump obviously won an amazing upset victory, but, to put this in football terms, he got some big breaks from the referee (James Comey). His opponent missed about a 32-yard game-winning field goal, in perfect conditions, as time ran out. Yes, he won, but this is not a formula which can be reliably duplicated ever again. In short, it was a fluke.

The narrative that Trump did something spectacular/different here because of his messaging is one of the many dangerous misperceptions of this campaign which will likely haunt Republicans for many years to come. You can’t claim Romney lost because he “wimped” out while Trump won because he was a “fighter,” when Romney got at least as many votes against a MUCH tougher opponent.

However, I fully realize that perception is reality and that for the rest of my natural life we will never again be able to win the “electability” argument in a GOP presidential primary because the response will always be “what about Trump?” I’m trying hard to get out of the Trump prediction business for a while, but unless he is a big success, I doubt there will be another GOP president in the next twenty years or so.

As for the popular vote, this is where Trump’s insecurities, hypocrisy, and delusion really become exposed. This morning, Trump sent out two extremely popular tweets, which were clearly inspired by his angst over Hillary having clearly “won” the national popular vote by perhaps as many as two million votes.

If the election were based on total popular vote I would have campaigned in N.Y. Florida and California and won even bigger and more easily

First, I’ll be charitable and presume that the mention of him not campaigning in Florida is some sort of typographical error (though he spelled out the entire word!). Not only is Florida his self-proclaimed “second home,” but I seriously doubt that there was any state where he spent more time and resources than he did there.

Second, New York IS his home and he did visit California on multiple occasions.

Third, had the rules of the game been changed, not only would he have campaigned differently, but so would have Hillary. Disturbingly, Trump seems to be presuming here that his touch is so “magical” that if only his presence would have been spread around to more populous states that he would have automatically won the popular vote. If true, that is really scary and shows just how much like President Obama Trump really is.

Fourth, Trump’s logic/math is simply garbage. Of the ten states with double digit Electoral College votes which were “uncontested” (the winner won by a dozen points, or more) and where turnout was therefore way down from an election where every vote “counted,” Hillary won seven of them. She also won by far the three largest of those states (CA, NY, and IL).

Would Trump have gotten many more votes if the election was determined by popular vote (something which I think this election proves would be a disaster)? Of course. But the obvious reality is that the states which would have seen the greatest increase in raw turnout totals are all EXTREMELY blue. There is no evidence or logic to suggest that it was only Republicans who stayed home in those states because the outcome was not in doubt. Heck, there were barely more votes in California (which is almost twice as large) than there were from Florida. Similarly, New York, which is basically the same size as Florida, produced about 2.5 million fewer votes for president.

It is very clear that in a popular vote scenario that Trump would have “lost” by significantly more than he already did. But we are now living in “TrumpWorld” where facts/logic/truth have no real significance and his legions of lemmings have been given something on which to hang their drug-like delusions.

Trump’s second tweet was the kind of stuff which will eventually put the parody news website “The Onion” out of business. He defended (awkwardly, at best) the reason the Electoral College exists:

The Electoral College is actually genius in that it brings all states, including the smaller ones, into play. Campaigning is much different!

This is this comical coming from the guy who was laughably claiming for weeks that the election was “rigged” against him. But it is also hilariously hypocritical coming from someone who tweeted this after the last presidential election:

And there you have the “Trumpism” philosophy in a nutshell. If it is bad for the interests of Donald Trump on that day, then it is a terrible thing. If it is good for Donald Trump at that moment, then it is awesome. Even when it is the very same thing! And people wonder why there are still a few “Never Trump” Republicans?!