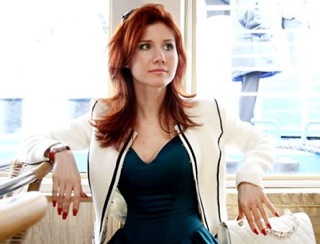 And now it’s officially summer. Remember sexy Russian spy Anna Chapman? No? She got caught spying on America and was deported, but because she was “sexy,” Joe Biden wanted to trade Rush Limbaugh for her. She was also semi-naked a bunch of times. Anyway, she’s finally wheedled her way back into the post-Weinerpocalypse news cycle– this time for threatening to sue organizers of the “Silver Boot” awards in Moscow, who graciously lauded her in the “Shameless Self-Promotion” category.

The UK Telegraph is reporting that Chapman, who has since landed a job in Moscow promoting investment in venture capital, is outraged at the prospect of being ridiculed for her self-promotion and is threatening legal action. The organizers of the Silver Boot awards read a letter from her attorney at the ceremony this week, which called the organizers “incompetent” and the award, for using her new-found identity as a spy to catapult her image into something resembling celebrity, “insulting” and “beneath her dignity” (unlike, say, posing for Maxim, but that’s a different story).

Most worrisome for the organizers, however, is her threat to sue (presumably for defamation), as well as her evocation of the praise she received from current Russian president Dmitry Medvedev and past and likely future Russian president Vladimir Putin. “Your incompetent assessment…” the attorney argues in his letter, “contradicts the position of Russian President Dmitry Medvedev… and that of the chairman of the Russian government Vladimir Putin, who has spoken in glowing terms of her.” Having a lawsuit in a Moscow court against a sexy Russian spy that has curried the favor of both the heads of state and government can’t be a good thing.

In other news from Summer 2010: the “Ground Zero Mosque”/Burlington Coat Factory complex is still nowhere near being built, Shirley Sherrod has been offered a consultant job at the USDA, and competition is underway at the aquarium in Oberhausen, Germany, to crown the heir to Paul the Psychic Octopus.