Should We Really Care How Many Times The Word ‘Jobs’ Was Used In Wednesday’s GOP Debate?

Should We Really Care How Many Times The Word ‘Jobs’ Was Used In Wednesday’s GOP Debate?

Should We Care How Many Times The Word 'Jobs' Was Used In The GOP Debate?
Twitter share button 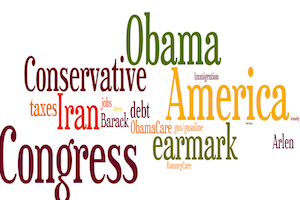 When you watch as much cable news as me, after a while you start noticing little patterns in news reporting — on Thursday, the prevailing narrative on MSNBC was the number of times the candidates uttered the word “jobs” at the previous night’s debate in Mesa, Arizona. This “factoid” was brought up no less than four times on four separate shows:

JIMMY WILLIAMS: The word jobs was uttered six times! By four men! Over an hour and a half period. Six times! If the number one problem in the country is people don’t have job, what’s the unemployment rate in Ohio? I don’t know, but I bet it’s pretty damn high. and they said “jobs” six times? Your uterus or my gay civil rights has nothing to do with jobs. Can they talk about jobs as opposed to your uterus or my gay civil rights? (The Dylan Ratigan Show, 4:21pm)

AL SHARPTON: For months now, the president has been talking from coast to coast about the thing Americans care most about — jobs. But funny enough, that word doesn’t seem to be in the GOP vocabulary. The four candidates in last night’s debate only said the word ten times between them. Willard only said it twice. Rick Santorum didn’t utter the word at all, but let’s face it. The Republican candidates and their crowds seem to get more riled up by other things. (PoliticsNation, 6:00pm)

Only six times! Or ten, according to Al Sharpton. They hardly talked about jobs!

The media loves to play these gotcha games but, in particular, it is a gross oversimplification here to say that because the candidates didn’t use the term jobs verbatim it meant the Republican candidates didn’t actually discuss employment issues.

For instance, take a look at this passage from Newt Gingrich — he briefly mentions he helped bring down unemployment:

And at another point in the debate, Romney discussed his business expertise, which — he would argue — could lead to more jobs:

But wait, — they mentioned the Olympics 10 times!

In fairness to Governor Romney, the 2002 Olympics in Salt Lake City was a significant economic success for the state of Utah and produced a considerable amount of jobs:

Employment: 35,000 job years of employment.
Since some people may be employed for a decade or more, while others will be employed for just a few months, it is difficult to characterize the number of jobs created. The measure of jobs used here is derived from the sum of jobs created in annual terms from 1996 through 2003. Olympic related jobs start in 1996 with less than 100, but increase steadily, reaching a yearly peak of 12,590 in 2001, and a monthly peak of 25,070 in February 2002. The sum of employment in all of these years is equivalent to 35,000 jobs lasting one year.

As you continue to analyze Wednesday’s GOP debate transcript, it becomes clear that it is a gross oversimplification to say because the candidates didn’t use the term jobs verbatim meant the Republican candidates didn’t actually discuss economic solutions.

But I thought all they wanted to talk about was birth control? It turns out, most of the birth control talk was from Ron Paul, who mentioned it six times, and by Romney twice. But it wasn’t scattered throughout the debate, in fact, Paul mentions it five times in one passage: 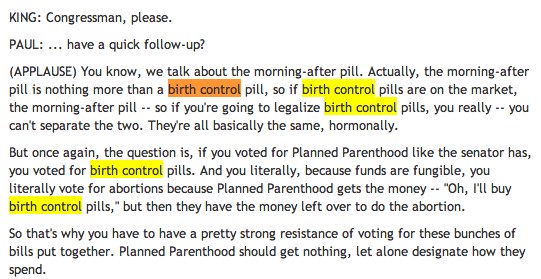 If there’s a clear case for a subject that took attention off of jobs — focus your eyes on the frequency of the use of earmarks, which was referenced 28 times between the candidates and astoundingly, Arlen Specter was mentioned 11 times! 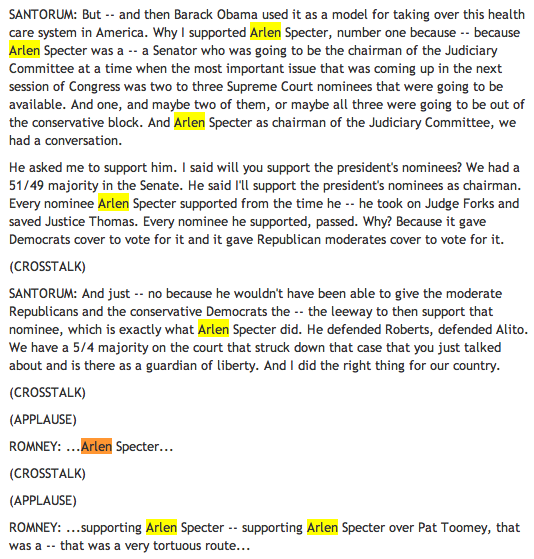 So, the next time an MSNBC talking head brings up this, “they only mentioned jobs x times,” meme — consider the fact that you can talk about creating jobs without mentioning the word “jobs.” Also, Arlen Specter was more of a distracting element than birth control.

And, of course, there is always the matter of that pesky moderator who is asking the questions that they are answering.