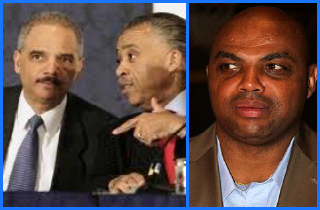 And on the fifth day since the verdict, a responsible message finally comes from a prominent member of both the black community and the media.

There’s a reason the former NBA great-turned-TV star is considered by many as the top studio analyst of any sport: Reason #1 is candor. Reason #2 is humor (and not the manufactured, cheesy kind that usually permeates most studio shows). Reason #3 is bravery, the kind that comes from calling out his own race when cartoon characters like Al Sharpton or Eric Holder won’t.

Yes, Chuck…the media’s hands have been dirty since the national media got wind of the story almost 15 months ago. It’s why NBC is being sued by Zimmerman’s legal team after it spliced a call between a 911 dispatcher and Zimmerman to portray him as a blatant profiler and racist. It’s why the New York Times got so much blowback for labeling Zimmerman as a “White Hispanic”, whatever that is.

The aforementioned Sharpton is organizing protests in 100 cities this weekend. And between now and then, rest assured there will be no shortage of screaming on cable news shows disguised as debate. Of course, those providing the noise have no interest in actually solving a problem, just like the media has little motivation to be responsible by not giving race-baiters—white and black—a national stage to fan the flames.

More from Barkley, who agrees with the Zimmerman verdict:

“(The trial) gave every white person and black person who is racist the platform to vent their ignorance. That’s the thing that bothered me the most. I watched this trial closely. I watched these people on television talking about it. A lot of these people have a hidden agenda. They want to have their racist views, whether they are white or black… Their biases come out.”

But like almost everything else in life when trying to answer a question starting with “why”, simply follow the money. In this case, money comes in the form of ratings. And guess what? If the big bounces we’re seeing in viewership (and in full disclosure, big increases in readership of sites like Mediaite are seeing as a result of reporting on the story still dominating cable news) are any indication, racism—and all of the talk around it—rates very well in the Nielsen department. Best part for the bean-counters: There’s no shortage of the kind of people Barkley is referring to with a hidden agenda. So it’s a cost-effective proposition for any network…just book a few guests (who are all free) and let ‘em have at it. No news teams to dispatch, no high production costs to worry about. Everybody profits from this story, but dialogue in this country certainly isn’t any richer from it.

The Zimmerman trial lasted about a month. According to the Chicago Tribune, 61 people were murdered in Chicago, with 53 of them being black. Most of those crimes are unsolved, but if past studies are any indication, it likely over 90 percent of those 53 murders were black-on-black crime.

Charles Barkley once told Bob Costas the following: “We, as black people, and I always say we, we don’t have respect for each other. You know? We got more black men in prison than we do in college, and crime in our neighborhoods is running rampant.”

He also knows who’s really interested in finding a solution.

Problem is, those kind of responsible people aren’t loud enough, aren’t extreme enough, for the media or so-called leaders of both races to bother with.

Not when there are agendas to be filled.

And eyeballs to be had…