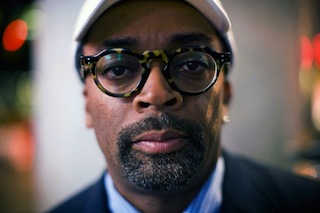 No matter what he’s talking about, Spike Lee is always fascinating to listen to. So it should only stand to reason that an interview where he talks about practically everything is going to be pretty great. Such is the case with the lengthy discussion up over at Vulture. In it, Lee bounces from topic to topic, from the incredibly small (good travel directions for the new Nets stadium in Brooklyn) to the incredibly broad (race relations in American popular culture).

Interestingly, Vulture’s Will Leitch seems keen to get a good “angry” Spike moment, brining up nearly every victim of Lee’s ire from the recent past from Tyler Perry to Clint Eastwood. Lee, however, deftly avoids saying anything controversial. In fact, he states that he “detests” the word “controversy” when Leitch points out that he seems to have mellowed.

For instance, when discussing President Obama’s chances in 2012 (Lee thinks it will be very close), he gets a chance to diss Mitt Romney and, instead, tells this amazing anecdote:

What do you think of Romney?
You know what’s funny? I met him in an airport, Reagan National Airport, and we said hello. It was, like, two, three years ago. I was just in D.C. and he was there and he said, “What’s up, Spike?” and I said, “What’s happening, Mitt?” We were in line getting something to eat. So I said what’s up and shook hands. I think it is going to be very, very, very close.

Good lord, I hope Romney didn’t jump into a rendition of “Who Let the Dogs Out?” after they shook hands.

And, when asked about the horrible fiasco that took place when he accidentally tweeted the address of an innocent elderly couple thinking that was where George Zimmerman was hiding, Lee quickly gives a remorseful mea culpa;

However, just because Lee’s answers may seem mellower, doesn’t make them any less thoughtful. Take for example, the answer he gives when asked if he still sees the kind of black minstrelsy in the culture that he parodied in Bamboozled:

Do you watch much television?
Not reality TV.

It’s an interesting thought, the idea of reality TV as a kind of “everyone” minstrelsy (would have loved to hear Lee’s thoughts on this bubbling topic). It’s not the only time in the interview that Lee eschews and expected racial answer to respond on a broader topic. When Leitch argues that Lee probably couldn’t get Malcolm X made today with the current state of black cinema, Lee responds that Oliver Stone couldn’t get JFK made either unless he dressed President Kennedy up in a cape and made him fly.

The whole interview’s a good read. Check it out here.