Radio sportscaster Jim Rome made the very poor decision this week of tweeting out an observation about how marching bands look like “dorks”: 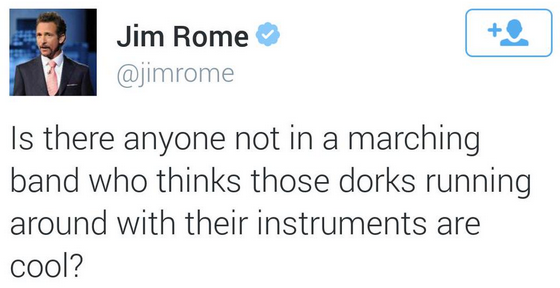 Rome got quite a lot of pushback from marching bands on Twitter (including the Army’s own field band):

That moment @jimrome became public enemy #1 of bands across the world. You messed with the wrong dorks. #MarchOnRome pic.twitter.com/Q6BBYD8ios

Hey @jimrome did u know many of those dorks at @TXAMUniversity will serve our country in the military? #MarchOnRome pic.twitter.com/x0DmBlMFhY

Hey @jimrome while you sit in a radio studio we perform on air craft carriers, just sayin bruh. #MarchOnRome pic.twitter.com/RjCuTUc6WF

Band is cool. @jimrome is a tool.

When you're a washed up broadcaster, bully band kids. That will get people talking about you. #romeisburning

Nobody puts baby in the corner. #romeisburning

Anyone think Jim Rome is cool? RT @jimrome Is there anyone not in a marching band who thinks dorks running around with instruments are cool?

Proud to be a @maroonband dork @jimrome! You really showed your stupidity now. This is real talent. #MarchOnRome pic.twitter.com/sBts9wte8Z

We #MarchOnRome because we're currently in Rome, Italy and performed for the Pope and millions of others today. pic.twitter.com/3cr3ItoG4f

Rome, of course, ended up deleting his tweet and apologizing:

Band nation – I hear you. I was out of line. I apologize. I do not condone bullying of any kind and that was not my intent.