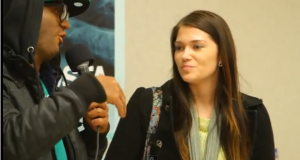 So… I’m going to go ahead and let this video speak for itself, for the most part, but here’s a little bit of context to get you started: This video was created by a stand-up comedian named Dave Ackerman, and the school he’s visiting is Brigham Young University.

My co-worker Jon Bershad was watching this video with me, and he brought up another routine that has a very similar “point,” but was executed quite differently. In Improv Everywhere’s (recently re-released) “Meet A Black Person” sketch, the group set an actual, real-life Black Person™ up in Aspen, Colorado — a place, the video notes, that is but 0.44 percent black. He then proceeded to introduce himself to many white people enjoying a nice ski vacation.

Ha! And cringe! And more ha!

Now, I think Ackerman’s point here (and I’m sure you’ll happily and graciously let me know if you think I’m over-analyzing) is to do more than simply point out ignorance regarding Black History Month and famous black figures throughout history. This bit seems to focus on a wider-ranging ignorance and awkwardness that exists between two groups, as well as point out the manner in which people can sometimes live in a homogenized bubble with very little awareness of or interest in anything that exists outside of that. And that’s ripe for humor. Awesome concept; I’m on board. But. There are problems.

First, I’d like to ask Ackerman (whose work I’m, admittedly, not familiar with) if setting this up at a well-known Mormon school (called out by name in the video) is a deliberate choice. Is this supposed to be commentary on Mormons? Religious education? Religion in general? Conservatives?

And I’d also, you know, like to ask Ackerman about his use of blackface. The video notes that only three people said something about Ackerman not really being black, and that he finds this disturbing. But… why? Was this one of the video’s goals – to try and see whether (mostly) white BYU students would be able to read a dark person as being “not black”?

I guess I’m left with more questions than laughs.

What do you guys think, though? Was the video funny? What worked, what didn’t? And what, my dears, is your take on his use of blackface?