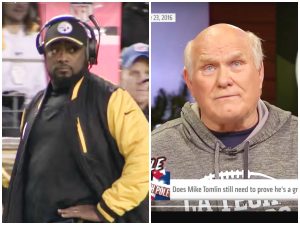 Okay, this one requires a bit of context — but the context will make you appreciate this trolling all the more.

On Tuesday, Tomlin was asked about Bradshaw’s comments at a news conference — and here’s where the context comes in. Tomlin, in his response to Bradshaw, invoked the name of  Thomas “Hollywood” Henderson, a linebacker who played for the Dallas Cowboys in the late 1970s. Prior to Super Bowl XIII in 1979, Henderson famously said that Bradshaw “is so dumb, he couldn’t spell ‘cat’ if you spotted him a C and an A.”

So now, given that context, here is Tomlin’s response to Bradshaw, via multiple sources:

“(T)erms like ‘cheerleader guy,’ to me, maybe fall outside the bounds of critique or criticism. They fall probably more into the area of disrespect and unprofessional. But what do I know? I grew up a Dallas fan, particularly a Hollywood Henderson fan.”