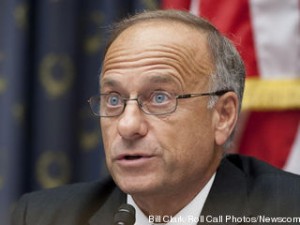 Here’s how the Republicans’ power over the purse could lead to an insoluble fight over spending, and, potentially, a government shutdown.

In a presentation at CPAC on Thursday, Rep. Steve King (R-IA) called on Republicans to hold the government hostage until President Obama abandons his dream of reforming the nation’s health care system.

Or to put it in King’s words: Republicans should do to “ObamaCare” what Democrats did to the Vietnam War.

Speaking to a small audience in CPAC’s auxiliary meeting room — where most of the social conservatives like King have been pushed this year — King outlined his plan to use Congress’ ability to shut down the government by refusing to fund it as means of pushing the health care reforms into an early grave.

The reform law signed by Obama last year includes what King called “self-enacting appropriations” — mandatory spending — which means they’ll kick in on their own unless Congress passes a law to stop them. King’s plan: tell Obama that unless he agrees to kill that spending, the GOP will refuse to pass new legislation to fund the government, which runs out of money on March 4.

Without that legislation, the government would shut down. And, voilà: a government held for ransom.

King said he got the idea from the 1974 law Congress passed to forbid President Ford from continuing the war in Vietnam. The law that Congress forced Ford to sign forbade him and the treasury from funding any military action in, around or in the skies above Vietnam.

King said the ’74 law was a “clear precedent” for Congress to rip out the automatic funding of the health care law.

“I disagreed with that decision Congress made in 1974,” he said. “But I believe we have the foundation to shut off the automatic funding to ObamaCare.”

King’s concept isn’t new. Tea Party leaders and their allies on the Hill — including King himself — have explicitly called on the GOP to use Congress’s power of the purse as leverage in its fight to kill the health care law. But two things are new here.

First, the appropriations fight is bearing down rapidly. Emboldened conservative Republicans, who are already unhappy with their leadership for not cutting more deeply into federal spending, aren’t going to be any happier if they miss an opportunity to hack away at the reforms. To that end, House Majority Leader Eric Cantor (R-VA) has suggested that the House will pass spending legislation to explicitly forbid the administration from spending new federal dollars on implementing the law.

That doesn’t satisfy King, who returned to the Hill after rallying conservative troops and told reporters, “If we’re gonna cut a billion dollars out of it in the CR and say we shut off the funding when we’re letting $105.4 billion go forward, in a year or two we’re going to see the roots of Obama care grow deep and he’ll use it all to implement it.”

Second, King himself has ratcheted up his campaign in recent days, eager to talk to reporters about it in order to build support among members.

If enough conservative Republicans join King, it will put House GOP leaders in a tough spot. They’ve promised a fairly open debate process on spending, and King’s plan appeals to some conservatives. It will be hard for him to force his plan into the legislation. But if it’s not in the final spending package, conservatives could threaten to defect, and Republican leaders will be forced to rely on Democrats to keep the government funded. That would probably mean breaking their own “Pledge to America” with relatively shallow cuts, and the health care law left largely untouched.

On his way into a meeting with members of his caucus Thursday evening, King confessed the odds were stacked against him.

“I think if there’s an agreement on $100 billion [in spending cuts] in that room, it’s taken some of the air out of the balloon,” he said. “I’ll have to see.”

After that meeting, Republicans claimed they’d reached an understanding with their restless rank and filers, and that the chances of rebellion are slim.

“I would say that I do not see any group of people that are gathering together to do anything other than to pass this bill,” said Rep. Pete Sessions (R-TX). At the same time, he admitted, Republicans have open lines of communication with several Democrats. “Every single member has been and will be kept in the loop as they choose, and there are a number of people who might be described as from the other party who are intensely interested.”

(This article was written by Brian Beutler and Evan McMorris-Santoro for Talking Points Memo where it was first published, and it appears on Mediaite