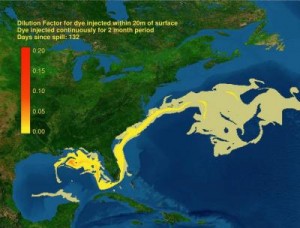 It took them a while, but the media is now giving wall to wall coverage of the oil spill in the Gulf and the desperate attempts to plug it up. What kind of coverage will we be in for if the oil makes its way up the East Coast to New York, the home of all things “lamestream,” as well as…shudder…the Hamptons. I joke but this is a very real possibility if a study released today by the National Center for Atmospheric Research (NCAR) is correct.

The research gathered by the center implies that the effects of the spill could be (and haven’t we heard this phrase every single day?) much worse than have previously been reported:

“I’ve had a lot of people ask me, ‘Will the oil reach Florida?’” says NCAR scientist Synte Peacock, who worked on the study. “Actually, our best knowledge says the scope of this environmental disaster is likely to reach far beyond Florida, with impacts that have yet to be understood.”

To further get the horrifying possibility across, NCAR created a series of computer simulations and animations that show possible paths the oil could take. The animation shows the oil flowing quickly up the entire east coast before spreading out and polluted wide expanses of the Atlantic Ocean. They caution though that these are not definite “forecasts,” but rather a possible scenario.

Here’s how they describe it:

“This animation shows one scenario of how oil released at the location of the Deepwater Horizon disaster on April 20 in the Gulf of Mexico may move in the upper 65 feet of the ocean. This is not a forecast, but rather, it illustrates a likely dispersal pathway of the oil for roughly four months following the spill. It assumes oil spilling continuously from April 20 to June 20. The colors represent a dilution factor ranging from red (most concentrated) to beige (most diluted). The dilution factor does not attempt to estimate the actual barrels of oil at any spot; rather, it depicts how much of the total oil from the source that will be carried elsewhere by ocean currents. For example, areas showing a dilution factor of 0.01 would have one-hundredth the concentration of oil present at the spill site.

The animation is based on a computer model simulation, using a virtual dye, that assumes weather and current conditions similar to those that occur in a typical year. It is one of a set of six scenarios released today that simulate possible pathways the oil might take under a variety of oceanic conditions. Each of the six scenarios shows the same overall movement of oil through the Gulf to the Atlantic and up the East Coast. However, the timing and fine-scale details differ, depending on the details of the ocean currents in the Gulf. The full set of six simulations can be found here. (Visualization by Tim Scheitlin and Mary Haley, NCAR; based on model simulations.)”

Well, on the upside, we may get definitive proof of whether or not the media handles an ecological disaster in the North East differently than one in the Gulf. On the downside, we’re going to have to lose the entire East Coast to do it.

Read more about the study here.