Stupak Is Back! Threatening To Derail HCR Unless Anti-Abortion Language Added 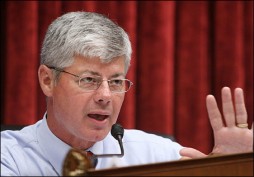 You remember Congressman Bart Stupak, he took a starring role in the health care debate back in November when he strong-armed his Stupak amendment into the House version of the Health Care bill. The amendment imposed “tight restrictions on abortions that could be offered through a new government-run insurance plan and through private insurance that is bought using government subsidies.” At the time Rachel Maddow described it as the “biggest restriction on abortion rights in a generation.” The Senate basically did away with the amendment in their version, but it may not matter. Stupak is back. Big time.

Stupack appeared on Good Morning America today (video below) and announced that he, and 11 other Democrats in the House would not vote for the HCR bill unless it included stricter language preventing federal fund from going towards abortion services.

“I want to see health care pass. I agree… people are being priced out of the market. We must have health care but, boy, there are some principles and beliefs that some of us are not going to pass…We’re prepared to take the responsibility. I mean, I’ve been catching it ever since last fall. Let’s face it, I want to see health care. But we’re not going to bypass some principles and beliefs that we feel strongly about.”

Obama, you may recall, noted numerous times that this is not an abortion bill and that he intends to maintain the current national status quo on abortion, which says, no public funding for abortion. The question, of course, is does Stupak have the power to make a difference? The answer appears to be possibly. While Obama may be able to get the bill through the Senate with his up and down vote, the House is more tricky and it’s not clear he has the votes he needs. Meaning, that in many ways we are back to where we were last fall: Will Obama loose the Health Care Bill over Stupak?