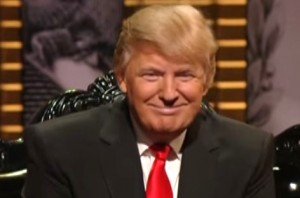 There’s another woman from Donald Trump‘s past with a story about him making crude remarks about women’s bodies. We certainly are seeing a lot of them resurfacing lately.

Vendela Kirsebom is a Swedish former model and Sports Illustrated cover girl, and she recently spoke with The Daily Mail about the time she and Trump were guests at the White House’s Correspondents’ Association dinner in 1993. As she recalled, Kirsebom said she asked to be moved to another table because Trump kept on making “excruciating” comments about women’s breasts.

“Everything he said was so vulgar. I couldn’t listen to his nonsense for an entire night so I asked if I could be moved,” Kirsebom said. “He talked about big breasts, small breasts, how one was better than the other and the differences between them.”

Vanity Fair editor Graydon Carter said that he sat Kirsebom next to Trump because he thought she’d “get a kick out of him.” Instead, Kirsebom said that she tearfully begged him to seat her somewhere else, and that she was particularly disturbed that Trump was also degrading women over their body sizes.

“His main focus was breasts and the sizes of women’s bodies. Fat women were not real women in his opinion,” said Kirsebom. “He basically said if you are not attractive and beautiful, then you don’t have any purpose as a woman.”

Kirsebom also said that Trump was “the most vulgar man I’ve ever met,” and that he made similar comments to Marla Maples that night while she was there as Trump’s fiance. Of course, this wouldn’t be the only time Trump has offered disparaging comments about a woman’s body.