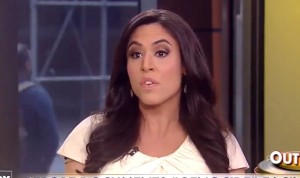 Fox’s Andrea Tantaros aired the perennial conservative complaint that President Obama has failed to string together the correct sequence of words in his descriptions of the terrorist group ISIS — specifically, she said, the president refuses to identify the group as being “driven by a perversion of the Islamic faith.” Except that that’s exactly what he has done — in those specific words, no less.

The hosts on Thursday’s OutNumbered discussed the Obama administration’s reluctance to invoke the word “genocide” to describe the group’s horrifying atrocities perpetrated against Christians (a designation that carries more ramifications that Tantaros acknowledged). “Invoking the word ‘genocide,'” Tantaros argued, “points to the fact that this is driven by a perversion of the Islamic faith. And they [the Obama administration] don’t want to do that.” [emphasis added]

The president has repeatedly sought to characterize ISIS as an extremist sect, not-representative of Islam as a whole. However, he has asserted that their ideology is grounded in — to use Tantaros’ phrasing — a “perversion” of Islam. Speaking last February at a summit on countering violent extremism, Obama said:

Al Qaeda and ISIL and groups like it are desperate for legitimacy. They try to portray themselves as religious leaders — holy warriors in defense of Islam. That’s why ISIL presumes to declare itself the “Islamic State.” And they propagate the notion that America — and the West, generally — is at war with Islam. That’s how they recruit. That’s how they try to radicalize young people. We must never accept the premise that they put forward, because it is a lie. Nor should we grant these terrorists the religious legitimacy that they seek. They are not religious leaders — they’re terrorists.And we are not at war with Islam. We are at war with people who have perverted Islam. [emphasis added]

“They want to do everything but acknowledge the genesis of this multi-millennia holy war,” Tantaros also said. “This is essentially a holy war and the administration does not want to acknowledge it.”

It is true that Obama’s administration does not want to label the conflict with ISIS a “holy war,” since doing so would seem to validate the group’s narrative that the U.S. is at war with the religion of Islam. Rather than rely on the ecclesiastical rhetoric favored by Tantaros, the president has opted for more tactile descriptions, labeling ISIS (or Daesh) unequivocally as “a brutal, vicious death cult that, in the name of religion, carries out unspeakable acts of barbarism.”