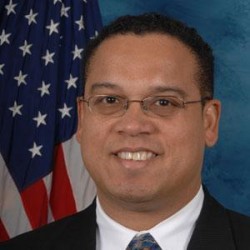 Apparently a week before the midterms it’s okay to throw subtlety, and the Constitution, out the window. Over the weekend the Tea Party Nation sent out an email to Minnesota voters backing independent Lynne Torgerson over Democrat Rep. Keith Ellison. So far, so typical. However here was the Tea Party’s rationale for opposing Ellison:

There are a lot of liberals who need to be retired this year, but there are few I can think of more deserving than Keith Ellison. Ellison is one of the most radical members of congress. He has a ZERO rating from the American Conservative Union. He is the only Muslim member of congress. He supports the Counsel for American Islamic Relations, HAMAS and has helped congress send millions of tax to terrorists in Gaza.

Emphasis mine (also the link, which better explains Ellison’s connection with CAIR). Not that that line needed emphasis, per se. It’s disturbingly, glaringly, obvious that the Tea Party Nation would like you to vote against Ellison because his is Muslim. Imagine for a moment inserting any other religion, or gender, or sexual orientation in lieu of Muslim and think what the reaction would be.

It is, one would imagine, the sort of statement big name Tea Party supporters would be quick to speak out against — especially considering the outrage over the NAACP calling the Party racist — and yet, there a has been nary a whisper. Sarah Palin, it’s perhaps worth noting, headlined the (costly) Tea Party convention earlier this year, which was organized by the Tea Party Nation. Also? Ellison is not the only Muslim in Congress, he is joined by Rep. Andre Carson (D-IN).