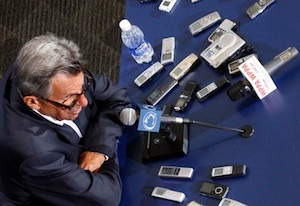 Penn State University burst into a mushroom cloud Wednesday night as head coach and college football icon Joe Paterno was forced out of program he has guided since the 1950s. There has been all level of debate over what would happen to Paterno over the past few weeks and whether or not he would be able to end his career on his own terms. This very discussion is a glimpse into why sports journalism is often considered a lesser form of the craft.

To briefly give backstory, the Penn State scandal involves the alleged predatory actions of a member of the coaching staff being charged with sex crimes against underage boys. The reason this has become a story bringing down highly placed figures in the University structure is the fact these crimes were never handled in an appropriate fashion and it has become obvious many had knowledge while never acting in an appropriate fashion. A grand jury testimony has numerous witnesses who have come forward to detail how the team’s defensive coordinator Jerry Sandusky has sexually abused them from ages around 10 years old. These crimes occurred on campus, and the reactions – and lack of action – from those in power are why this has now brought down a vaunted football institution, and the speculation in the media exposes why sports journalists are often derided.

Sandusky is charged with despicable acts perpetrated against very young students who now face a life promised to be filled with challenges most of us cannot fathom. This is why discussion about the fortunes of the head coach has been remarkably repugnant. Columns and field reports have been filed pontificating on whether “JoPa” would be permitted to retire with grace, when the obvious stance should have been wondering why he had not been fired earlier. Now in complete fairness there are numerous sports journalists who are exemplary in their field and who have skills that rival conventional reporters. Many have taken a stern view of this story and demanded the University act in an appropriate fashion. The problem is in the collective mindset of sports outlets, which often chase such stories from the perspective of the sports impact first, not employing the journalistic integrity needed. Note how often this story, one involving a serial sexual predator targeting adolescents who have had their lives destroyed, has been framed on how this would impact Paterno and the football program.

The central story that sparked all this was and undergrad working in the program who walked into a locker room one night and spotted Sandusky conducting sexually predatory acts on a youth in the showers. The manner in which this incident, and unknown others, has been dealt with is the basis of all the controversy. I can say with certitude if any of the numerous charges against Sandusky are true (the Grand Jury lists 40 counts of sexual abuse) then the man is nothing short of demon deserving of the harshest of punishments. This stance does not make me noble or morally superior; it simply means I am human. What is central in all of this controversy is the decided lack of humanity on display over the years. Instead of going to authorities, instead of taking direct action on behalf of young boys and preventing further horrors to be perpetrated on them, or others, this was instead funneled into a bureaucracy and dealt with in a manner that was designed to protect the university, and not the lives of those boys.

Sandusky was reprimanded, he had his keys taken from him, and was told to no longer bring young kids onto the campus. Instead of taking proper action steps were made to have Sandusky take his issues elsewhere. The lack of humanity, and focus on “The Program”, often extends to journalists as well.

A prime example of this was seen at a Wednesday evening a press conference that had been called for the announcement of Paterno’s dismissal. Jeff Darlington, a stalwart reporter from the NFL Network, had been dispatched to the Penn State campus to cover the story and he picked up on some of the skewed values often found in sports circles. Darlington sent out Twitter feeds between his network dispatches and he was clearly bothered by the general mood of the gathering: 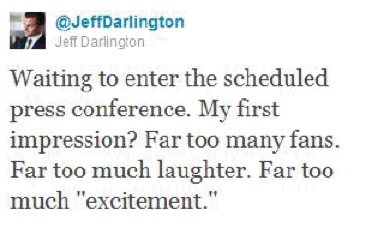 Minutes later the college board of trustees made the announcement that Paterno was being forced to step down. Darlington picked up on the general mood around him: 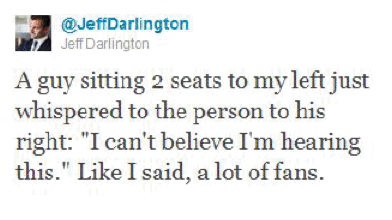 Even now, in the aftermath, we are being served a continuous serving of skewed perspective. Numerous reports are flowing all focused on one thing – the dismissal of Paterno. While passing mention is made of the victims, and how they are “central” in the story, JoPa continues to actually be the focus. This is so much the case that Paterno’s name is featured at a vastly higher ratio than the man responsible for all of the problems, Sandusky.

This has to be the result that sports reporters all too often find themselves in a position of being fans first, and journalists second. The borderline hero worship concerning Paterno has led to many reporters starting from the vantage of how much respect Paterno should be accorded. Far too many reports that detail the missteps in this story frame the acts against the career achievements of Paterno — as if his deeds may somehow mitigate the misdeeds. This becomes more revealed when a comparison is made to another college scandal earlier this year.

Prior to the football season the University of Miami was embroiled in a controversy involving a team booster who had a long history of showering gifts on players, in clear violation to NCAA statutes. These violations spanned more than a decade and included things like watches and cars gifted to players, as well as parties held on the booster’s private boat, and improper methods of influencing recruits. What is remarkable today is how stark the reactions were in the sports journalism circles. As the U.M. scandal broke there was no shortage of reporters saying the University should
be served with severe sanctions, with many intoning Miami deserved to be handed the harshest sentence, the “Death Penalty”, which is a removal of most scholarships and benefits for players that makes recruitment near impossible and effectively cripples the football program.

Tellingly not many have been making a similar pronouncement concerning Penn State, despite parallels. The travails involving Sandusky date back at least thirteen years, nearly as long as some of the U.M. charges. Yet the press reaction to Paterno and Penn State has been, to this point at least, less rabid. Are we being led to believe that it is somehow far more egregious for students to accept a Rolex, or to attend a party on a luxury yacht, than it is for a person of authority to abuse his position in order to prey upon youth and ruin the lives of those children? It does not make any sense, and still the amount of venom leveled towards the Hurricane program months ago was palpable, all while this week we have been treated to near sympathetic attitudes towards a coach whose actions may have shielded a coworker, and by extension perpetuated a nightmare against the children in the now darkly ironic-named Happy Valley.

The reasons Penn State now finds itself mired in a morass of scandal is the direct result of people placing the program first, forgetting that football is not more important than humanity. Unfortunately too many sports reporters have the same trouble making that distinction.