The Trump/Hillary Debate Was Like ‘The Rumble in the Jungle’ 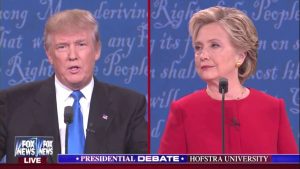 Usually, comparing political debates to a boxing match is both clichéd and inaccurate. That was not the case with the first debate between Donald Trump and Hillary Clinton. This event really fit that comparison in nearly every sense of it.

This was the “Rumble in the Jungle,” with Muhammed Ali (Hillary) taking punch after punch from George Foreman (Trump) in an early barrage, surviving in a “rope-a-dope” before Foreman finally tired and fell to the canvas, no longer able to carry the weight of his own attacks. The only real difference was that, unlike Foreman, Trump was not officially counted “out” and therefore the winner of this battle will be decided very subjectively by the voters. My guess is that opinions will mostly solidify, everyone will claim victory, but not that much will change, with Hillary probably regaining a slight but sturdy lead by next week.

Here are some of the things that we learned from the debate:

Donald Trump is able to get through passible answers on most subjects for a full two minutes. He is also capable of maintaining his composure on a big stage for at least twenty minutes. After that, all bets are off, especially if you imply he’s not rich.

Hillary Clinton, assuming what we saw was not a body double, is able to stand for 100 minutes at a time without coughing and does not appear to have Parkinson’s disease or need an earpiece (sorry Alex Jones fans, this must be a crushing blow to you).

Lester Holt, a Republican, did an amazing job of keeping almost every question/topic to the Democrat candidate’s liking, hitting on every subject I previewed, but doing so in the most anti-Trump fashion possible. Questions on Trump’s taxes, “Birtherism,” the Iraq War, and Hillary’s “look” all very much played to her favor, and the “police/race” question omitted Colin Kaepernick, which could have been lethal to her.

Hillary made a big mistake early on by treating Trump as if he is a legitimate candidate and it almost cost her, until, after the first twenty minutes, Trump turned into a real jackass and later started to lie precipitously.

Hillary torched Trump on his taxes and that may have been why Trump’s “fantastic” temperament wasn’t so terrific the rest of the way.

The biggest story “missed” (as far as I can tell) by most of the news media so far is that Trump effectively/amazingly admitted that he does NOT pay federal income tax, In response to her claim that he does not, Trump said, “it WOULD have been squandered” if he had paid any.

As a conservative/libertarian who believes in the Constitution, the most depressing policy portion of the debate was when both major presidential candidates strongly agreed that the government should be able to take away the gun rights of American citizens without even due process (via the terror watch list).

Marco Rubio had to be smiling at how much water Trump was drinking all night. By the way, what was with Trump’s sniffles? It sounded like Parkinson’s disease to me.

Trump is still making stuff up about “Birtherism” and now insists that the whole fiasco was a massive victory for him. This is like Ted Cruz claiming that the way he went about finally endorsing Trump couldn’t have been played more to his political advantage.

Trump is also still making things up about his stance on the Iraq War. He is now insisting that he told one person (privately) that he was against it all along. That one person just happens to be Sean Hannity, his biggest media fanboy (with whom he did his first post-debate interview). Trump apparently picked Hannity as his witness for this task because his own mother is deceased.

Trump has an amazing temperament and it is one of his best qualities. He just decided not to put it on display in front of the biggest audience, in the most important event, of his life.

The temperament issue may be all that really matters in the long run for this event. This was probably Trump’s last chance to prove to the 60% of voters who are skeptical of his ability to be “presidential.” His fans, as always, I’m sure loved the performance, but in this one key matrix Trump clearly failed. His poll numbers won’t collapse because of this. However, his reservoir of good will with those who are not yet his supporters is likely now as empty as his over-used water bottle.