This Video Is The Most Goddamn Patriotic Thing You Will Ever See.

This Video Is The Most Goddamn Patriotic Thing You Will Ever See. 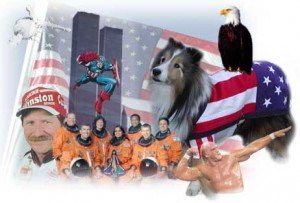 I’m not even going to do some wacky analogy to things that could be more patriotic, because whatever stupid amalgamation of eagles, M-16s, stock cars and bikinis I conjure up would never approach the video you’re about to see.

But! First, some context. There’s a guy named Carl Malamud who has a mission: to take public domain video, primarily from the United States government, and put it online. His non-profit, Public.Resource.Org is a joint partner in Fedflix, which posts the videos on YouTube and Archive.org. As of this writing, there are 2,412 videos in nearly 50 categories.

(I wrote about this project back in December as well; at the time, Malamud was just getting underway.)

And then there’s one – one glorious little snippet of video – called National Anthem Trailers: Shock and Awe. It is below. You’ll want to watch it fullscreen, and have a box of tissues or ammo handy.

Missiles! Bullhorn Bush! Fuckin’ explosions! And it was made by the United States Government! Who can casually use references to 9/11 for propaganda purposes (12 seconds in, timed with the cymbal splash)? The Department of Defense, that’s who. You like the Tea Party and hate big government, that’s just fine – but this is why we pay our taxes. Mission accomplished.

Uncovering this gem (and the versions called NAT: Historical and the heart-pounding NAT: Work Hard / Play Hard) should certainly put Malamud in the running for this year’s second Medal of Honor for a living hero. You’re welcome to explore the rest of the PublicResourceOrg YouTube channel or even the wimpy Library of Congress’ (want to see a guy sneeze?) – you will find nothing that can touch the champion above.

Not even if it is video of a bald eagle smoking a cigar and wearing a red, white and blue bandana while ogling a blond and winning Daytona. But – feel free to send me that link.

The intro image is what you get from Googling “most patriotic image ever”. It’s from the Miami New Times.