Tom Brokaw Doubles Down: If You Go To White House Correspondents Dinner, ‘It’ll Steal Your Soul’ 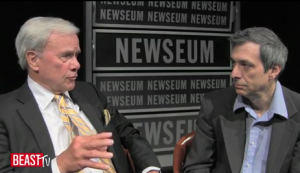 Over the weekend, Tom Brokaw made some less-than-supportive comments about the White House Correspondents Dinner — and on Tuesday, he stood by that sentiment. Brokaw went further and added, “If you go, it’ll steal your soul.”

RELATED: Tom Brokaw: ‘It Is Time To Rethink’ The White House Correspondents’ Dinner

Brokaw had originally said “it’s time to rethink” the dinner:

“If there’s ever an event that separates the press from the people it’s supposed to serve, symbolically, it’s that one. It is time to rethink it… I don’t think the big press event in Washington should be that kind of glittering event where the whole talk is about Cristal champagne…, who had the best party, who got to meet the most people. That’s another separation between what we’re supposed to be doing and what the people expect us to be doing, and I think the Washington press corps has to look at that.”

Fox’s Ed Henry had responded to Brokaw’s criticism by adding that Brokaw ignored the charity aspect of the event. On the other hand, Rush Limbaugh said that Brokaw was essentially saying the “whole industry is losing whatever reputation it had.”

On Tuesday, he told The Daily Beast’s Howard Kurtz, “I do feel strongly that it’s gone way too far.” Brokaw added, “What do we symbolize to the American people? That evening […] says, ‘let them eat cake.’ […] I think it’s just the worst kind of symbolism.”

Along the same lines, Brokaw said, “It seems to be simply an exercise in hedonism” — a message from the media to the people they serve, that says, “We really don’t care about you.”