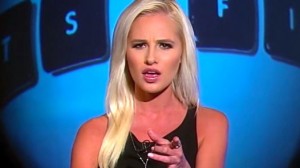 Over the weekend, The Blaze’s Tomi Lahren sat down with The Daily Caller’s Jamie Weinstein for an interview on Weinstein’s podcast. Over the nearly hour-long conversation, she hit on a number of topics related to her conservatism, her support of Donald Trump and his core message and her belief that the Clintons have killed many people who have gotten in their way.

Early on in the interview, she labeled herself a “smart ass” and said that her Blaze show is more than just the angry monologues that have made her into a viral star. She also hyped up her intelligence, bringing up her GPA in high school and college to prove she was smart, pointing out that dumb people can’t have their own shows. (She did call Kim Kardashian dumb but then said she is very good at marketing.)

Later on in the conversation, she noted that she has a “short attention span,” told Weinstein that she’s “not a reader” and doesn’t “read long books.”

She isn't big reader. When asked what books most influenced her, said, "I'm not a reader. I don't read long books." https://t.co/VNje4TKSIX

Lahren revealed that she has a conspiratorial side, especially when it comes to Bill and Hillary Clinton. Jumping on board with the number of theories that claim the Clintons have had a number of people murdered, such as Seth Rich, Lahren confirmed that she believes they’ve been personally involved in killings.

Commentary’s Noah Rothman had the following to say on Twitter regarding the interview:

Tomi Lahren says she has a "short attention span," doesn't read books, and is pretty sure the Clintons have murdered people. I sense a link.

Listen to the whole interview above, via The Daily Caller.