‘Too Late’ — Conservatives Not Having RBG’s Walkback on Trump Criticisms 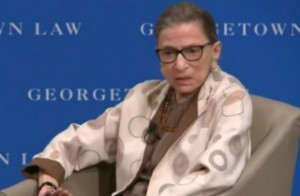 Within minutes of Ruth Bader Ginsburg admitting that her criticisms of Trump had been ill-considered, conservative pundits lambasted the Justice for expressing her too-little-too-late contriteness.

Ginsburg had leveled multiple criticisms at the presumptive GOP nominee, inciting Trump to accuse her of being a “disgrace to the court”, and even drawing the admonishment of the New York Times editorial board.

Ginsburg on Thursday morning walked back the remarks, saying in a statement, “On reflection, my recent remarks in response to press inquiries were ill-advised and I regret making them. Judges should avoid commenting on a candidate for public office. In the future I will be more circumspect.”

But for many conservative pundits on Twitter, this did not meet the criteria for a proper apology and, besides, the damage was already done. Michelle Malkin for instance said that it was “too late” for the Justice to walk back her “politicized diarrhea of the mouth.”

Wonder how all the Notorious RBG fanbois and fangrrrls are dealing with their hero losing a “civility” debate to Donald Trump.

Hey #NotoriousRBG – were your reputation and legacy worth destroying for @HillaryClinton? pic.twitter.com/Pypx6TdUhq

Pure Garbage – Ginsburg’s Damaging Ignorant remarks can’t be put back in the bottle. She is corrupt. https://t.co/NCYMaWlHsf

Everyone on the conservative side knew that Justice Ginsburg is an idiot. Judges are not magical creatures, people. https://t.co/a5FMgkaeTr

Justice Ginsburg should be removed from bench. Period.#SCOTUS

Imagine what the Left would be saying if Justice Thomas had said abt Obama what Ginsberg said abt @realDonaldTrump?