Trump Tells CNN That Clubgoers Should Have Been Armed
Video

Trump Tells CNN That Clubgoers Should Have Been Armed 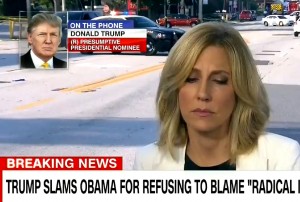 Donald Trump said that if more people at the Orlando nightclub had been armed, there would have been far fewer dead.

Speaking to CNN’s Alisyn Camerota Monday morning, Trump said, “If you had some guns in that club the night that this took place, if you had guns on the other side, you wouldn’t have had the tragedy that you had. If people in that room had guns with the bullets flying in the opposite direction right at him—”

Trump continued, “Right at his head, you wouldn’t have had the same tragedy that you ended up having. And nobody even knows how bad that tragedy is, because I think probably the numbers will get bigger and bigger and worse and worse. I hear the injured are so gravely injured. But if you had guns in that room, if you had — even if you had a number of people having them strapped to their ankle or strapped to their waist, where bullets could have flown in the other direction right at him, you wouldn’t have had the same kind of a tragedy.”

The remarks echo what he said following the massacre at a Paris concert hall last November, “You can say what you want, but if they had guns, if our people had guns, if they were allowed to carry –” Trump said, “it would’ve been a much, much different situation.”