Trump Whines He Can’t ‘Fight Back’ Against Megyn Kelly. Sad! 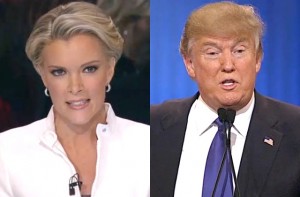 Donald Trump has a pretty sick obsession with Megyn Kelly (in Fox News’ words) and he doesn’t seem to understand the reasons people have a problem with it:

So the highly overrated anchor, @megynkelly, is allowed to constantly say bad things about me on her show, but I can't fight back? Wrong!

Let’s go over this again, shall we?

1) Trump fundamentally misunderstands how the relationship between the press and the politicians works. The job of the press is to scrutinize every politician, especially the president, and Fox News can certainly lay claim to being tough on President Obama. In fact, President Obama has not gone after Fox News in his entire presidency with the kind of anger and vitriol and declarations of bias that Trump has. Does anyone like the idea of a President of the United States who would go after their media critics like this?

Politicians, candidates, and presidents get scrutinized by the media. Suck it up already.

2) Trump has complained that Kelly focuses too much on him. I think it’s time we let him in on a little secret: he is the leading presidential candidate of one of the two major political parties in the United States of America. He is probably going to be the GOP nominee. So of course he gets more attention than the others (maybe too much, as some have argued). Of course Kelly may devote multiple segments in any given night to him.

3) This entire feud started because Kelly asked Trump about his past misogynistic remarks. Trump has attacked that repeatedly as an unfair assessment, but time after time after time he has proved that was an absolutely fair question. Hell, he’s now on a tear calling her “Crazy Megyn.” Because someone who didn’t have a problem with women wouldn’t constantly be attacking and belittling a powerful woman and calling her “crazy” and insulting her looks, right?

4) Let’s briefly put aside point number one here and allow that Trump should be able to “fight back” against his media critics if he wants. Well, if he feels he must fight back, could he maybe act less like a dick about it? I mean, believe it or not, you can engage in media criticism without resorting to nasty insults. That is entirely possible. Or at the very least just find some damn synonyms for “loser” already.

5) This absolute madness he retweeted:

"@gamzorz: @megynkelly Dont worry Trump, They are losing thousands of viewers and money. Roger Ailes will be telling Megyn to stop"

Absolutely no part of this statement is at all based in fact. Fox News has not been losing viewers or money at that kind of rapid rate, and if you think Ailes would be pressuring Kelly behind the scenes to stop criticizing Trump, kindly direct your attention to Mediaite’s timeline of statements Fox/Ailes have released since August defending Kelly from Trump.

6) Lastly, and this is the most crucial part, if Trump so hates and despises Kelly, and has tweeted several different times that people should boycott her show, why in God’s name does he still watch? He tweets about her show so much, it’s clear he keeps watching. Why? That’s just weird. Is it a “keep your eye on your enemies” kind of thing?

I mean, it’s possible that Trump is just an unapologetic media whore who loves to hear people talk about him, even in a negative context, and he only gets mad for the sake of attention, but that would be insane behavior from someone who wants to be President of the United States, right?