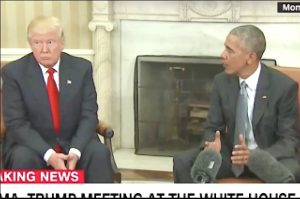 One of the many misperceptions of how this crazy presidential campaign transpired is that the mainstream news media truly wanted Hillary Clinton to be elected. The reality is that news media was always torn on this question, and this conflict clearly helped contribute to her Electoral College defeat.

Philosophically the news media agreed more with Hillary. They also knew that she was more qualified for the job. Moreover, they feared that a Donald Trump presidency might be bad (possibly REALLY bad) for the country. However, those considerations are not as powerful to most members of the narcissistic news media as those which more directly impact them. On that front, a Trump presidency was actually far more appealing.

First, the news media has never really liked Hillary Clinton personally. This is why they were all too happy to help Barack Obama steal the Democratic nomination away from her in 2008. But more importantly than that, a Trump presidency was always a FAR more compelling and ratings-grabbing narrative than even the concept of a corrupt and boring first female president.

This “conflict” was like forcing a hungry child to choose between eating their vegetables, and saving room for dessert. At best, they will pretend to eat the vegetables (thus coverage which was roughly “equally” negative of both candidates) but will make sure that they don’t miss out on the ice cream. This is especially the case when the ice cream party is likely to last for at least four years.

Today, as President Obama and President-elect Trump held their historic White House meeting (in a city in which Trump got about 4% of the vote) the news media started to reap their reward for making sure that they never really took Trump out of the race entirely by, for instance, obsessing about how the hell a controversial businessman could possibly get way with not releasing any of his taxes.

Think about how much more compelling the storyline today (and for the foreseeable future) was than if Hillary had been able to kick the 32-yard field goal on Election Day, which is all it would have taken to beat Trump. No one would have cared about her meeting with Obama. But now, with Trump making a joint appearance with the president whose eligibility he questioned for years and whom he once called “the founder of ISIS,” every little moment is “breaking news,” “unprecedented,” and “historic” (in other words: “we can almost FEEL the ratings on this otherwise slow news day!!”).

Of course, this is only the beginning. Everything Trump the ratings magnet does now will be from the file of “stuff we have never seen before and therefore we can’t take our eyes off of it.” All the news media has to do is turn on the camera and collect their checks. For a group of mostly very lazy and selfish people, it doesn’t get any better than that. If Hillary had been elected they would have actually had to work hard just to keep their jobs as the campaign ratings immediately evaporated like a puddle in the desert sun.

There was actually one bit of “substance” which came from the joint photo opportunity between Trump and Obama which may be a foreshadowing of the future. After Obama ended the proceedings and urged Trump not to answer any questions, Trump went out of his way to respond to one query about his host by calling him a “very good man.”

Now obviously one would expect, for the good of the country, that Trump would be respectful and cordial to the sitting president, no matter what he really thinks of him. However, this statement by Trump was completely unnecessary given when and how it was made. It is also keeping in Trump’s MO of dramatically and immediately altering even his most firmly held positions on people, even Vladimir Putin, simply because someone is nice to him for a few seconds.

This is what scares conservatives like me most about Trump. Not only do we have no idea what he really believes (partly because he has no principles) but he what decides on any given subject is very likely to be decided by whichever side is the last/shiniest object to appear before his face last. It certainly seems to me that calling Obama, unnecessarily, “a very good man” is the first of what will be many indications that the roaring lion that we saw on the campaign trail is going to quickly be reduced to a pussy (the feline, not the female body part) cat when faced with the enormity of the office he will soon hold.

I have no doubt that there are certain “safe” zones; the Trump who brags about his penis at presidential debates will still emerge as the faux alpha male. But on the stuff that really counts, I believe that he will melt like a candle in a blast furnace and revert back to a remarkably “establishment” (and largely liberal) view of things.

There will be no special prosecutor for Hillary Clinton (his supporters will mostly praise Trump for being a “statesman” when he betrays that debate promise), there will be no “draining of the swamp” in Washington, there will no border wall, there will be no deportation force. I even doubt that Obamacare will even be repealed and replaced, unless by something equally reliant on big government to run and pay for it all.

How his rabid supporters will respond to all of these inevitable betrayals is anyone’s guess. Their ability to rationalize is already legendary and they are now completely emotionally invested (remarkably just like Obama’s supporters were eight years ago) in believing in this liberal conman whom they think they elected king. However, regardless of how they perceive the reality, if today is any indication at all, we are far more likely to get a version of Trump who is far more like Obama than they ever could have imagined (their elections are already remarkably similar in many ways, just ask Hillary Clinton who got more votes against both of them and still lost).

In fact, about the biggest real difference between the Trump presidency and Obama’s is that the news media will now no longer be conflicted about how to treat the sitting president. With Trump, both their economic and philosophical agendas will align creating the motivation to eventually, and belatedly, finally destroy him.