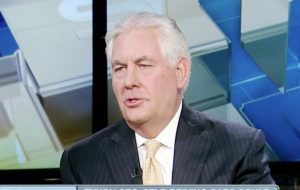 There have been numerous points during Donald Trump’s magical mystery ride to the presidency at which conventional wisdom held that the core of the conservative movement would stand up against him. However, like a dwindling army where each solider is waiting for the guy next to him to lead the charge, that has never really happened.

After everyone saw what happened to Mitt Romney and Marco Rubio, and with “conservative” media training most of its cover fire on Trump’s conservative critics rather than on the liberal conman leading a coup of the Republican Party, any resistance has been both tepid and temporary. Rather than choosing one hill on which to die, it has been a coward’s death by a thousand cuts.

Most conservatives have been whistling past the graveyard. Relying on wishful thinking and the blind belief that there is just no way that Trump could end up being worse than the hated Hillary Clinton would have been. They have, while occasionally holding their breath at what they are witnessing, convinced themselves that this is all going to turn out just fine.

Through the course of Trump’s administration appointments there have been an eclectic mix of surprisingly solid selections interspersed with classically Trumpian head-scratchers (Steve Bannon, Mike Flynn, Ben Carson, Linda McMahon, etc). But, through it all, the idea that he might select Mitt Romney for the critically important position of secretary of state has given most remaining Trump critics on the right a security blanket on which to hold as the daunting realization that Trump is really going to be president of the United States becomes more of an unavoidable reality.

The prospect of having Romney as a key player in the Trump administration muted several key fears with just a couple of high-profile meetings. Picking Romney would show that Trump wasn’t really vindictive, that he cared more about the country than his own ego, that he understood his own weaknesses, that he couldn’t be bullied by his advisors going on Fox News Channel to rip Romney, and that, most importantly, he wasn’t really a stooge to Vladimir Putin and Russia.

But instead, after having been publicly lobbied by Kellyanne Conway, Newt Gingrich, Mike Huckabee, and Sean Hannity against choosing Romney, Trump finally announced today that he would go with ExxonMobil CEO Rex Tillerson.

In a vacuum, the selection of Tillerson would be quirky, and maybe troubling, but not necessarily alarming. He has no governmental or diplomatic experience, and has a liberal background on several cultural issues which used to be important to conservatives (before almost all of our positions were dictated by the current mood of a liberal conman). But it is his relationship with Putin which elevates this pick from the realm of “that’s weird,” to “this is a seminal moment which will reveal just how willing conservatives are to be hypocrites in the defense of Trump.”

Tillerson is literally a friend to Putin. He has a “friendship” award to prove it. He has done deals with the Russian government likely worth more money than the net assets of our president-elect. He opposed the current sanctions against Russia. Russian officials have publicly praised his appointment.

Now, on the other hand, he comes enthusiastically endorsed by former Secretary of State Condoleezza Rice (can we at least acknowledge the insanity that Trump apparently took the advice of Rice, whom he effectively blamed for 9/11 and the Iraq War, on the biggest decision of his transition?!). For me, Rice’s view matters and it buys Tillerson at least some benefit of the doubt. However, the problem here is that Tillerson is hardly the only reason to doubt Trump on Russia.

One of the most demoralizing side effects of “Trumsanity” on “conservatives” has been the willingness (eagerness?) of so many, especially in the right-wing media, to engage in blatant hypocrisy and twisted “logic” in defense of our new Messiah. There is no more dramatic example of this than the issue of Russia.

Just imagine how conservatives would have reacted if Hillary Clinton had been elected with the following data points:

To say the least, it would have been roughly the equivalent of how fans of Alabama football would respond if their head coach Nick Saban decided to leave the school just before the playoffs to take over at arch-rival Auburn. Instead, from most political and media elites on the right, there has been little more than excuses and rationalizations in illogical defense of the new king.

Because Tillerson’s selection fits an unquestionable and disturbing pattern, it must be taken as exactly the signal that it seems to be. Even Trump appears to understand the incredibly damaging message his pick sends on Russia (especially with the “election hacking” story still fresh!), as he purposely stepped all over his own news coverage of the event by meeting VERY publicly with Kayne West and making a “Dancing with the Stars” contestant his energy secretary.

To be clear, I still don’t think that that Donald Trump is some sort of Russian “Manchurian Candidate.” But I do think that conservatives would definitely be concluding that Clinton was indeed exactly that if she had even half of the same background with regard to Putin.

I also understand the concept of wanting to “keep your enemies close,” but that theory requires one to at least realize that your enemy actually is indeed an adversary. There is simply no evidence to suggest that Trump, or anyone very close to him, remotely does.

This now sets up a fascinating situation where if senators John McCain, Lindsay Graham, and Marco Rubio (all of whom have indicated that they have good reason to oppose Tillerson’s nomination) stick to their principles, and the Democrats hold the line, that Trump may not get his selection confirmed.

In a pre-Trump world, McCain, Graham, and Rubio would have plenty of “cover” for their principled stand in the “conservative” media, but those days are as gone as mobile phones without video and internet capability. Now they will be seen as traitors for daring to question and embarrass their king. It is possible that they might be willing to endure the heat, but only McCain really has nothing to lose, and if a couple of vulnerable Democrats break ranks, then Rubio and Graham would likely cave as well.

If recent history is our guide, what’s left of principled conservatism will, after some temporary bluster, put up only passive resistance before giving Trump (and now Vladimir) what he wants.

You simply can’t make this stuff up.