In Defense of Junk Touching From The Right 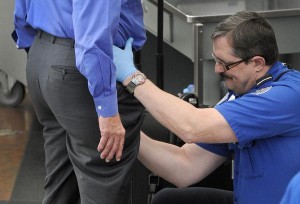 The incessant anger directed at the Transportation Security Administration (TSA) this past week has been grossly misdirected.  While it’s a healthy exercise to question government policy, the demonization and rabid overtures that have been spewing from my compatriots seem so over the top that I simply cannot hold my silence.  Why some Americans appear to be rallying en masse against the government’s efforts to keep citizens safe is beyond me.  Safety is paramount; obsessive compulsive fear of the government should not supersede rational discussion, nor should it hamper necessary policies.

In light of the chaos that has ensued, I cannot help but wonder if the current outrage over TSA regulations is rooted in an exaggerated manifestation of conservative views on government control and intervention.  As a conservative, I have a healthy (in my view) take on the need for small government and common-sense principles.  That said, rallying against the TSA’s efforts flies (no pun intended) in the face of the latter.  The conservative movement would do itself justice to curb the partisan malignancy that lay behind at least some of the explosive reactions we’re seeing.  While Big Brother certainly isn’t the answer to America’s woes, a weak or complacent transit security policy is a danger – to say the least.

Following the passage of The Patriot Act, liberals went ballistic at the prospect of “losing personal freedoms.”  This over-the-top insanity still rings on in some leftist circles.  Now, we have conservatives returning the charge from the other side of the aisle.  Listen and listen carefully – the TSA (and the federal government) has nothing to gain by seeing you in the nude and/or frisking you. And not for anything, but judging from the provocative media our nation gleefully consumes, we’re certainly not a nation of prudes (not that I’m happy about that fact, either, seeing as I’m somewhat prudish).  Why the sudden shame?

Let’s get a grip, people.  These provisions are for our safety.  Is there room for improvement?  Sure.  Should the government continue looking for alternatives, while considering behavioral profiling, etc.?  Absolutely.  But, if we (conservatives) are going to complain about weak Obama administration policies (and trust me, Obama has implemented a plethora of executive ridiculousness), we need to recognize if and when something viable and praise-worthy has been done.  In the case of airport security, I commend the president and federal officials for protecting the American public (gasp).

Interestingly, in recent years Americans have held favorable views of the TSA.  A 2009 Gallup poll found that 70 percent of the American public felt that the government was “doing an excellent or good job protecting air travel.”  Flashing forward to Jan. 2010, a McClatchy-Ipsos Reid poll found that 51 percent of Americans were willing to give up some liberties if it meant protecting and securing the nation from terrorist attacks.

That same poll found a major decrease in the proportion of Americans who felt safe when flying as compared to a similar study conducted just three years prior.  If Americans feel less safe and are open to giving up “some liberties,” why are basic screenings creating such a stir?  If anything, the Obama administration has taken terrorist threats seriously and is making provisions to secure citizens.  Just before the media had a heyday with airport security “horror stories” last week, a CBS News poll found that 81 percent of the nation supports having full-body scanners at American airports.

One final note: Let’s not demonize TSA agents and treat them like they’re the enemy.  These individuals are hard-working Americans who are carrying out orders and working to their capacity to keep us safe.  Are there TSA employees who have been and will be inappropriate?  Absolutely – just as there are renegades and delinquents in any profession.  Demonizing agents is no way to prove a point.  Conservatives, let’s use the common sense we peddle so regularly and calm ourselves. The Obama administration has, indeed, delved into far too many arenas, but airport security is the one area where control actually benefits you (and not the government).

Feel free to direct hate-mail and accusations of RHINOism to billy@pathufindmedia.com.