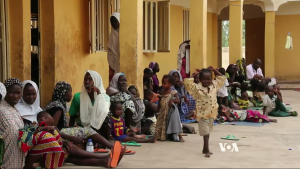 An 18-year-old Nigerian woman who was once held captive as a Boko Haram bride gave an interview to the Thomson Reuters Foundation describing her life following her rescue last year and her efforts to refocus on her education.

Seven months ago, [Zara John] said she was still in love with the Boko Haram commander. But going back to school has helped John to forget about Ali, her militant husband, and inspired her to focus on her education and her future instead.

“It was after I started school that I stopped thinking about him,” she told the Thomson Reuters Foundation by phone from her home in Nigeria’s northeastern Adamawa state. “God forbid,” she added when asked about the possibility of ever seeing Ali again.

[…] [W]hen foreign journalists starting visiting John, she was struck by the eloquence and confidence of the women among them. One female journalist gave her advice, which John described as the turning point in her decision to go back to school.