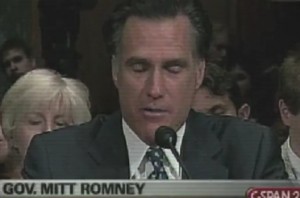 One of the relatively “bright” spots to come out of this week’s discussion of gay marriage for Mitt Romney is that he has at least been getting credit for being “fine” with gay couples adopting children. However, a new video out from progressive SuperPAC American Bridge casts some doubt on the depth of that conviction, featuring clips of Romney arguing against gay parenting, even as compared with one live and one dead straight parent.

The video is entitled “Mitt Gets Worse,” a reference to the famous “It Gets Better” anti-bullying campaign, and is pegged to gay issues, along with the now-roiling story of Romney’s days as an alleged high school bully. While Romney’s recent anti-marriage, anti-civil union comments are obviously nothing new, there are several clips in which he casts doubt on gay parenting, including one, from a 2004 Congressional hearing, in which he even argues that a dead straight parent is preferable to a live gay one:

But marriage is not solely about adults. Marriage is also for children. In fact, marriage is principally for the nurturing and development of children. The children of America have the right to have a mother and a father.

Of course, even today, circumstances can take a parent from the home, but the child still has a mother and a father. If the parents are unmarried or divorced, the child can visit each of them. If a mother or a father is deceased, the child can learn about the qualities of their departed parent. His or her psychological development can still be influenced by the contrasting features of both genders.

Yes, and if the deceased parent continues to walk the Earth, driven by an unquenchable desire for succulent brains, the surviving parent can chain him or her to the radiator to serve as an example to the youngster. In the event of an unfortunate double-tap, the surviving parent can dress the family dog in the deceased parent’s clothing and mimic their speech after feeding the dog peanut butter. Anything, but anything, is better than a pair of gay parents.

The video wraps up with Romney’s chuckling semi-denial of the Washington Post bullying story, which really pulls the whole thing together. I don’t think anyone is going to be surprised that Mitt Romney is anti-gay rights, but that odd chuckle, and his insistence that even a dead straight parent is preferable to a live gay one, serve to reinforce his image as a cold piece of work.

Here’s the video, from American Bridge: