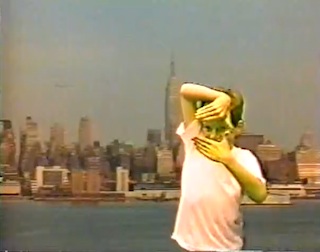 We see a lot of Internet videos in the day. Sue us. After watching cable news for four hours straight, sometimes we just want to watch a cat ride a skate board. Anyway, most of those videos we keep to ourselves as they don’t really fall into the purview of what the site is. Other times, however, it’s Friday. And, really, what’s Friday if not for enjoying a 20 year old video of a nine-year-old’s fully choreographed, epic ode to Madonna’s “Vogue?”

The video comes from Robert Jeffrey, a (now 29-year-old) screenwriter who posted it on Vimeo with this description:

“I performed to MADONNA’s ‘VOGUE’ in the Summer of 1991 when my parents took me to Hampton Beach Casino in Hampton Beach, New Hampshire. A business in the casino at the time gave tourists the chance to lip-synch to their favorite pop songs in front of a blue screen background, and I was lucky enough to partake that summer.

In honor of the twentieth anniversary of MADONNA’s “TRUTH OR DARE” and in celebration of MADONNA’s upcoming ‘W.E.’, here is my nine year old self paying tribute to the woman who changed my life and continues to inspire me just as much today as twenty years ago.”

Now, some commenters on the blogs that have posted this are already going the political route, using it to combat the surprising recent rash of public figure “Choicers,” people who believe homosexuality is a sin. The argument being, “Look, do you really think this kid was walking up to that casino going, ‘God, I can’t decide if I want to spend my day playing football or fully choreographing a dance set to Madonna? What a tough choice!’?” However, like I said, today’s a Friday, so we can put politics aside briefly and just enjoy this for what it is, purely delightful nostalgia.

If only we could all get away from our busy, angry, adult lives and vogue sometimes.

ME AT NINE, PERFORMING TO MADONNA IN SUMMER ’91! from Robert Jeffrey on Vimeo.