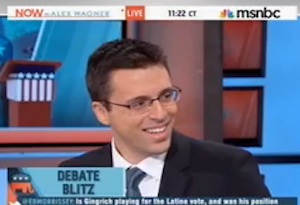 Ezra Klein once asked the Washington Post to fund his vision for an independent website — which included a budget reportedly starting at $10 million and hiring dozens of staffers. From there the story goes that the Post found the proposal so ludicrous it didn’t even entertain providing a counter-offer.

Klein proceeded to leave the Post and launched Vox.com in April of 2014 instead. He’s now listed as its co-founder (along with Melissa Bell) and editor-in-chief. With great power comes great responsibility… and that goes well beyond Klein deciding what stories and angles he’s going to provide to his readers on a daily basis; it also entails ultimately being responsible for his staff and handing out discipline if warranted.

Today is one of those days where the latter applies, as one of Klein’s editors is encouraging all those who attend Donald Trump rallies to resort to violence via rioting:

Advice: If Trump comes to your town, start a riot.

Let's be clear: It's never a shame to storm the barricades set up around a fascist.

So what say you, Mr. Klein? This isn’t a he-said, she-said situation where ambiguity provides an easy out. It’s all there in 140 characters or less to see. Said Tweet went out over 12 hours ago, yet nothing has been written by Klein on Twitter, nor has he issued any kind of official statement on behalf of Vox. If this goes on any further, the Vox editor-in-chief’s silence on the matter can only be interpreted as advocacy for what Emmitt Rensin is encouraging here.

In most cases, such a Tweet would have been deleted by now. Not in Rensin’s case, who only continues to somehow attempt to defend it. And since parallel universes are always fun to visit in these situations, imagine for a moment what would happen if, say, a conservative editor declared that all of Bernie Sanders’ protesters should incite riots at the next Hillary Clinton rally. The howls for his or her termination would be heard far and wide on Twitter. Cable news would have wall-to-wall Brady-Bunch-square-segments of outraged pundits all demanding for his or her firing… along with the editor-in-chief of that publication for sitting idly by and saying or doing absolutely nothing about it.

You wanted you very own publication, Ezra… you got it. Here’s some humble advice for the next step in this particular situation: Stop hiding and making a statement. Suspend or fire Emmitt Resnin outright.

Because by doing nothing, you’ll have blood on your hands for tacitly supporting this kind of crap from not just some lower-level Vox writer, but an editor you hired.

You wanted to be a chief?

On Thursday night, Emmett Rensin, the deputy editor of Vox’s first person section, sent a series of tweets that, among other things, urged people to riot if Donald Trump comes to their town.

We at Vox do not take institutional positions on most questions, and we encourage our writers to debate and disagree. But direct encouragement of riots crosses a line between expressing a contrary opinion and directly encouraging dangerous, illegal activity. We welcome a variety of viewpoints, but we do not condone writing that could put others in danger.

In this case, Emmett’s tweets violated Vox’s standards and Emmett has been suspended as a consequence.