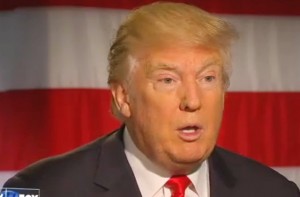 One of the delegates who will be representing the Trump campaign at the Republican National Convention in July thinks it may be necessary for the people who run the federal government to be, well, “the polite word is, eliminated. The harsh word is killed,” he says.

David Riden of Tennessee was selected by Trump’s campaign to be a delegate candidate on the Volunteer State’s ballot, one of a few candidates to raise eyebrows in recent weeks.

In an interview with Mother Jones published Thursday, Riden expressed his viewpoint that any U.S. leaders who, in his estimation, defy the Constitution should be “killed by American citizens with weapons.”

The Second Amendment, he said, provided that Americans should be allowed to procure “the weaponry necessary to be able to overthrow the federal government,” which includes “tanks, assault weapons, [and] bombs.”

Riden said that he disclosed this philosophy with the Trump campaign when they vetted him. He told MoJo:

If the federal government were to follow the path of all other governments, at some point it will turn to tyranny against the people. And at that point, when it stops to uphold and abide by the Constitution—and we’re talking about the Supreme Court, Congress, and the executive branch, all three are way off away from the Constitution right now—the people have the right to assemble, bear arms, go to Washington, DC, or wherever necessary, and go into military battle against the government and replace those in government with individuals that will uphold the Constitution. The Constitution should remain, but the people that are abusing it should be, the polite word is, eliminated. The harsh word is killed. And they’re killed by American citizens with weapons. And if people have tanks, assault weapons, if they have bombs—they need to have the weaponry necessary to be able to overthrow the federal government.