Walmart Wants You to ‘Shock Your Friends with This Islamic Costume’

“Fat girl costumes” are not the only problematic products Walmart is pushing this Halloween. Qasim Rashid, as spokesperson for Ahmadiyya Muslim Community USA has discovered the “Mens Pashtun Papa Costume,” which consists of vaguely-Middle Eastern looking garb and a long beard. The description for the item reads, “Nothing is sacred this Halloween. Shock your friends with this Islamic costume.” 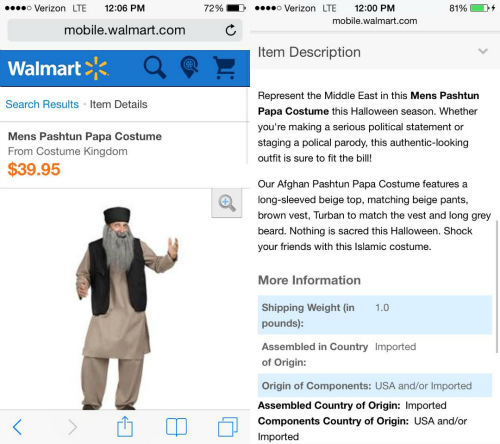 For some reason, the photo is no longer available on the Walmart website, but the description remains.

Wow @Walmart jumping on the opportunity to make money off racism against Pashtuns this Halloween. pic.twitter.com/TPcA1DeFjm

"Shock your friends with this Islamic costume." Seriously @Walmart you are shameless & ignorant. #NotYourCostume pic.twitter.com/rUxznrunjP

As one of his followers noted, Pashtuns are traditionally from Afghanistan and Pakistan and not the Middle East:

@MuslimIQ @Walmart not only that, Pashtuns are in Central Asia, not the Middle East.

UPDATE — 1:35 p.m. ET: Walmart has removed the Pashtun costume from its website. In a statement, Brooke Buchanan, senior director of Walmart Corporate Communications said that it was being sold through Costume Kingdom, one of Walmart’s third-party vendors:

“When it was brought to our attention on social media, we began working to pull this down. We are deeply sorry that this costume is on our website, and we are pulling it down as soon as possible. We are calling on all of the other retailers to pull it down as well. We have strict policies with our third party vendors, and it’s very important to us that products on the site don’t offend groups of people, or minorities.”