Watch: Different Video Of CPAC Slavery Guy Puts You In The Middle
video

Watch: Different Video Of CPAC Slavery Guy Puts You In The Middle 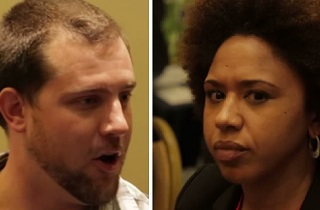 One of the many lowlights from this year’s Conservative Political Action Conference was the “Trump The Race Card: Are You Sick And Tired Of Being Called A Racist When You Know You’re Not One?” seminar (not to be confused with the “Trump The Green Card: Are You Sick And Tired Of Immigration Policy Keeping The Europeans Down?” seminar), at which totally not-racist Scott Terry defended slavery. After the incident became a mid-sized news story, documentary filmmaker Katy Jordan posted a longer clip of the event, shot mere feet away from Terry and Kim Brown, the radio host who says she was shouted down by the crowd when she tried to ask the moderator a question.

Jordan’s clip, shot for filmmaker Kevin Dotson‘s forthcoming documentary called Black Tea, features cleaner audio, a closer point of view, and about forty more seconds than the version that made the rounds on cable news. In the extended clip, an organizer steps in to say “I love the passion, especially on this topic,” but asks the crowd to be “respectful” of those who came to hear the presentation, as Terry shouts “Respect my demographic!”

You can also hear Kim Brown tell Terry that “Slavery was not a benefit to black people,” to which Terry replies “That’s your opinion.”

Then, an attendee behind Kim Brown begins to engage her by saying something about “what happened to white factory workers,” to which she responds with an incredulous “What are you talking about?”

This angle is a window into what it might have felt like to be Scott Terry, or Kim Brown, at that event, and what’s remarkable is that, while Terry keeps anticipating the crowd’s negative reaction (“I’ll just let people throw stuff at me”), it never materializes. There’s (perhaps shocked) laughter, some clapping, and some pushback from Kim Brown, but no audible indication that anyone else in that room challenged Terry’s assertions. Even the host speaker, K. Carl Smith, never got around to answering Terry’s question “Why can’t we be segregated?”

At best, the reaction was a response to the absurdity of what Terry was saying, but it never gave way to disgust at the depravity of his premise. I don’t presume to be the arbiter of how people should react to things, and I do believe that one of the ways that this clip has been oversold is the degree to which this crowd was representative of CPAC as a whole. People voluntarily attending a seminar that is premised on racism being a “card” would seem to be much more likely to accept, if not agree with, arguments about the “disenfranchisement” of white people.

Representative or not, though, the vibe was consistent with popular conservative attitudes about race. The ability to speak about things like slavery, segregation, and racism as abstractions is a privilege that, in my view, automatically disqualifies the speaker. If the only way you have ever experienced racism is by having people accuse you of it even though you know you are not, then you’re probably not in a position to know whether slavery was a warm hammock for black people, or whether the free market should decide where black people can eat in public.

Still, if that’s your attitude, that even the depraved idea that slaves owed their masters gratitude for food and shelter is just “fantastic passion” on an issue, then own it. There’s no rule that says you have to stone the guy to death. But then, own the contrast between that, and the way Kim Brown was treated. K. Carl Smith told TPM that Brown “rudely interrupted” him to ask a question, while Scott Terry merely made some “racially insensitive comments,” but after the session, Smith said he talked with Terry, and “we left as friends.”

Brown’s account, consistent with TPM reporter Benjy Sarlin’s reporting, further deepens that contrast. Following the interruption that Smith described, Kim Brown tried to ask a question during the designated Q and A time:

After other attendees stood up to ask their questions, it was my turn.  ”I’m not a conservative, ” I began.  The room erupted in a raucous chorus of boos and jeers.  My voice was completely drowned out.  I remained standing, amused by the deafening vitriolic reaction.  I tried again.  ”This man [Smith] is being disengenous…” BOOOOO! HISSS! YOU’RE NOT WELCOME HERE!!! AHHHH!!!

At that point, I was not allowed to finish my question.  Yells of “shut up” and “no one wants to hear your question” were directed my way.  Okay. Mind you, the room’s reaction to the segregationist was decidedly muted.

Nobody booed or hissed slavery-defending Scott Terry, or told him he wasn’t welcome. His views were, at the very least, tolerated. What was the question that caused that crowd to turn against Kim Brown? Using the racist Pete Hoekstra “Debbie Spend-it-now” ad as an example, she asked:

“Why is it when racist/sexist statements and ads come from the right, there is no condemnation from that side of the aisle?”

…“When the leadership on the Right fails to repudiate such statements, it sounds to minority voters that the entire conservative movement is okay with this kind of speech, ” I exclaimed breathlessly. My nerves were slightly on edge by that time lol.

Smith’s response was, “Well, when there were Mammy cartoons drawn about Condeleeza Rice, I didn’t hear Jesse Jackson say anything.” Jesse Jackson doesn’t hold elected office. So there’s that.

Kim Brown says that she has asked Katy Jordan to release the portion of the tape that shows the crowd “screaming at me,” and I’ve reached out to Jordan, as well. She has yet to respond, but hopefully, she will put out the relevant portion.

Conservatives can defend the idea of engaging someone like Scott Terry, but not without explaining why Kim Brown’s point of view is not also worthy of discussion.