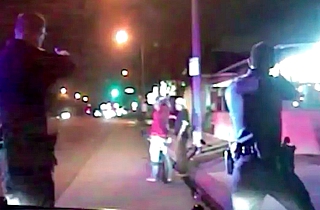 Video was released Tuesday evening of a 2013 incident in which two Gardena police officers fatally shot an unarmed man. A judge ordered the video unsealed after the case was settled for almost $5 million.

The incident began when 35-year-old Diaz Zeferino and two others were mistakenly stopped by officers on suspicions of bike theft. Two different dashcam videos captured what followed, as Zeferino dropped his hands a couple of times and officers open fire, killing him. They also struck the man standing next to him.

Gardena police had hoped to keep the video sealed, but a judge, acting on a request from the Los Angeles Times and other news outlets, denied their request. Via LA Times:

In unsealing the videos, U.S. District Judge Stephen V. Wilson said the public had an interest in seeing the recordings, especially after the city settled a lawsuit over the shooting for $4.7 million. Wilson rejected last-ditch efforts by Gardena attorneys, who argued the city had paid the settlement money in the belief that the videos would remain under seal.

The “defendants’ argument backfires here — the fact that they spent the city’s money, presumably derived from taxes, only strengthens the public’s interest in seeing the videos,” Wilson wrote.

Gardena Police Chief Ed Medrano pledged to outfit his officers with body cameras but warned against the public release of videos.

“Our police officers are entrusted with sensitive and extremely personal information and we often come in contact with people under tragic situations and at their worst,” he said. “We worry about the implications of this decision and its impact on victims and average citizens who are recorded by the police.”