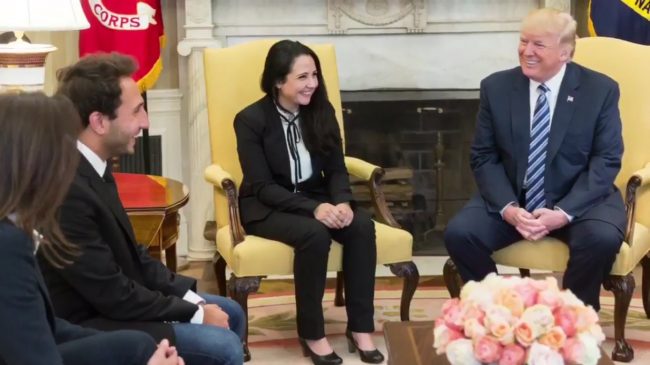 Following the release of Aya Hijazi, who was imprisoned in Egypt for three years, and her subsequent visit to the White House today, President Donald Trump tweeted out a video celebrating her release. Trump and his administration had worked for the past few weeks to secure Hijazi and others freedom.

The short video was highlighted by Lee Greenwood‘s ‘God Bless the USA’ and images of the American flag. Meanwhile, the president provided the caption “WELCOME HOME, AYA!” along with a very patriotic hashtag:

Hijazi, a dual U.S.-Egyptian citizen, and her Egyptian husband had established the Belady Foundation in Cairo to assist homeless children. According to the Washington Post, they and their co-workers were incarcerated in May 2014 on charges of child abuse and human trafficking — denounced by Human Rights Watch as a “travesty of justice” — and had found themselves trapped in the Egyptian court system in the proceeding three years. No evidence was presented and court dates were postponed or canceled.

Egypt’s position changed after Trump met with President Abdel Fatah al-Sissi and publicly praised him. Sean Spicer said, according to CNN, that Trump “made clear how important it was” to secure her release.