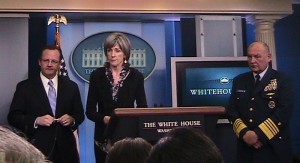 After Interior Secretary Ken Salazar‘s tough talk this weekend about pushing BP out of the way if they don’t shape up, I thought Monday’s hour-long White House briefing with Press Secretary Robert Gibbs, Coast Guard Admiral Thad Allen, and Obama adviser Carol Browner would mark a turning point in the administration’s posture toward BP, and their handling of the BP Oil Spill. Let’s see how that worked out.

On the very first question of the briefing, the AP’s Ben Feller asked Allen what Salazar meant when he said the government would push BP out of the way. Allen replied, “Well, I would say that’s more of a metaphor.”

This must have been a relief to BP executives, who doubtless feared that they would be physically shoved all over the command center with impunity, Night at the Roxbury-style.

It was all downhill from there. Allen went on to observe, of Salazar’s comment, “Well, to push BP out of the way would raise the question to replace them with what?”

Allen and Gibbs went on to brush off any suggestion of federalizing the response.

Okay, so we’re stuck with BP, because they’ve got the manpower and resources to deal with the spill. At least they have to listen to the government, right? Right? ABC News’ Jake Tapper asked Allen that very question:

TAPPER:  A couple of questions.  First of all, if the EPA — and maybe this is a question for Ms. Browner — but if the EPA says to BP, “We don’t want you using this dispersant.  We think it’s too toxic,” and BP says, “OK, but we don’t care.  We’re going to do what we want to do anyway,” then what avenue does the federal government have to — to — to challenge that?

…ALLEN:  OK.  If we want BP to do something, even if it appears they do not want to do it, they are issued an administrative order by the federal on-scene coordinator that has the effect of law.

TAPPER:  But they’re not doing it, right?

BROWNER:  Well, there’s a series of meetings going on.  They started last night.  Lisa Jackson is in the area, and there will be a press advisory or, I guess, a press conference later today at — what time?  Do you know…

Leaving aside the fact that “federal on-scene coordinator” sounds like someone who’s in charge of ice sculptures, and an “administrative order” evokes a requisition for a red Swingline stapler, at least these things carry the force of law. Of course, there’s also a law that says I have to mow my lawn, but see if my lazy ass has done it in the past month-and-a-half. It’s one thing to make a law, quite another to enforce it and penalize the offenders.

I asked Allen what would happen to BP if they failed to comply with an administrative order, or failed to do so in a timely fashion.

Tommy Christopher:    Thanks, Robert.  First of all, are you going to brief on other topics after this or is this —

MR. GIBBS:  If you’ve got a question on another topic, I’m happy to shoot.

Tommy Christopher:   All right, I have three questions then.

MR. GIBBS:  Just three?  Why don’t we pick our most important and we’ll see if there’s other topics on oil that — while we have these guys here.

Tommy Christopher:   Well, I have one on oil.  Can I do one on oil and one not on oil?

MR. GIBBS:  Does that count as one of your questions?  (Laughter.)

ADMIRAL ALLEN:  I can go and get you the actual cites.  I’m not sure I have them top of my head right now, but I’m sure there are both civil and criminal penalties that could be invoked.  We can get that information to you.

Post-briefing, I followed up with the press office, who referred me first to the Oil Pollution Act of 1990, which does not describe such penalties, then to the Coast Guard. I’m still waiting to get an answer from them. It’s as if the government can’t imagine that BP would ever deceive or disobey them.

Of course, as Jake Tapper pointed out, BP has already refused or slow-rolled several administration directives, with no ill effects. They don’t have to give the government the finger. They can just trade memos until the cows come home.

The administration needs to figure out what ground there is between where they are now and federalizing the response, and occupy it.