What If Newt Gingrich Was Just In An Open Marriage And Admitted It? Would That Be Such A Bad Thing?

What If Newt Gingrich Was Just In An Open Marriage And Admitted It? Would That Be Such A Bad Thing? 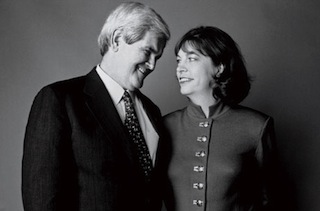 Like most people, after watching Marianne Gingrich’s Nightline interview, I was left asking “Is that it?” However, unlike most people seemingly, I wasn’t disappointed that there was no new information. I was disappointed because the only real “bombshell,” presumably the thing that Marianne had been warning for years would destroy Newt’s career, was that he asked for an “open marriage.” That’s it? There are tons of people who have successful open marriages. Would we really rather just have another guy running around cheating all the time?

However, the disdain that people have had in the coverage hasn’t been about Gingrich’s past, but about the question itself. You can hear it in the way media figures say the term “open marriage,” they’re disgusted by the very concept. And that just blows my mind.

Every single year, we have, it seems like, a dozen or so stories about public figures getting caught cheating. And that’s just the politicians! Then we have someone like Gingrich talking about how he’s made mistakes and he’s learned and people believe attempt to believe it at face value. Well, you know what? When men (or women) have spent their entire life cheating on partners, nine times out of ten they don’t stop. They just get better at it.

Wouldn’t it be better if, instead of electing a guy who’s good at hiding his tracks, we elected someone who was good at being honest about themselves? Would it be such a bad thing to have a candidate who just readily admitted to himself that he or she was bad at monogamy and had gotten a working and amicable arrangement with his or her spouse?

Part of me thinks it’s silly to even consider this. In our modern era, we haven’t even had a single president, let alone one who’s dating while married. However, on the other hand, we have elected tons of presidents who sucked at monogamy. We can all assume that some or most of their wives knew about it. So, is it too hard to imagine that they consented as well? I mean, there were always rumors that the Clintons had an “arrangement.” What if those rumors had actually turned out to be true and what if they had admitted it? Would it make us think less of them? I know it wouldn’t for me because it would confirm that Bill isn’t just a liar in his personal life.

Now, I should point out that I’m not and never have been married. And I have thought about how I would react if a woman I was seeing asked to open the relationship. And, you know what, I’m really not sure I could. However, that doesn’t make me think less of people that do. In fact, it causes me to respect them for accomplishing something I probably couldn’t.

Here’s something I can do though; cheat. We all can. Because it’s way easier to lie than to be honest. So why are we considering that a virtue?

If Newt Gingrich wasn’t a hypocritical serial cheater but, instead, an honest spouse in a pre-arranged open marriage, why should we see that as a character flaw? Why on earth do we in America prefer to listen to a known liar say they’ve changed just so we can nod our heads and look the other way?