What’s The Real Reason Behind This AZ Official’s Newfound Birtherism?

What’s The Real Reason Behind This AZ Official’s Newfound Birtherism? 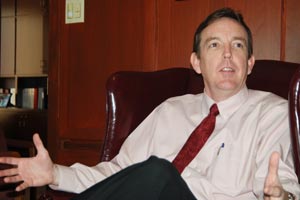 Earlier today, we reported that Ken Bennett, Arizona’s secretary of state, appears to have taken a turn toward birtherism. Bennett, apparently in response to constituents’ requests, has reached out to the state of Hawaii to verify President Barack Obama‘s birth certificate. Without said verification, Bennett said it’s “possible” he’d take Obama off the state’s ballot.

While birtherism is hardly new, this latest development, to many, begs the question: why? In his radio interview with Mike Broomhead, Bennett denied being a birther himself — and further denied raising the issue as an attempt to pander to those in the state who do question Obama’s birthplace. Though it’s not an outrageous thought. Bennett’s said to have his sights on another job: governor. Bennett recently filed paperwork for an exploratory committee in the 2014 Arizona gubernatorial race. (As a sidenote, Arizona Gov. Jan Brewer, who isn’t Obama’s biggest fan, said last year that birthers are “leading out country down a path of destruction.”)

This is how Bennett told Broomhead that he, himself, does not question Obama’s natural-born citizenship: “I believe the president was born in Hawaii — or at least I hope he was.” As Dave Weigel points out over at Slate, “a classic birther out!” Bennett manages to simultaneously deny the conspiracy theory and leave just enough doubt about the authenticity of his denial.

Dismissing it as a “pander,” Weigel brings in some background, citing a politician who embraced birtherism as a political calculation, won the election and let the citizenship issue fall by the wayside. Writes Weigel:

It’s a move pioneered by Nathan Deal, now the governor of Georgia. In late 2009, when he was trying to distinguish himself in the GOP primary, he started requesting proof of citizenship from the occupant of the White House. “I have looked at the documentation that is publicly available,” he said, “and it leaves many things to be desired.” He sounded awfully concerned! Then he won his primary (in a squeaker against the Palin-endorsed candidate), won the election (by a landslide), and had a GOP supermajority to work with in the legislature. What’s he done on Obama’s citizenship? Absolutely nothing. Georgia’s birthers, who TRUSTED Deal, are left to fight out frivolous lawsuits.

Maybe Bennett does have genuine doubts, but politically, it works out. Gearing up for the primary, he could be positioning himself “on the right side of Joe Arpaio.” (Arpaio, you’ll recall, is a staunch birther.) Weigel’s takeaway: “After all, in 2015, Gov. Bennett would have nothing to do or say about the ballot status of Barack Obama. He’ll have pandered and moved on, risk-free, with the birthers dispersed.”

So perhaps the return to the issue we were all hoping to put behind us is an act of appeasement. We’re sure to see it play out in the coming months. Until then, it continues.