White Texas Conservative Wins Election by Pretending to Be Black 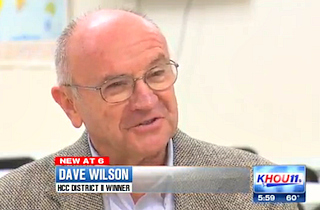 Dave Wilson, a white, conservative anti-LGBT activist running in a largely African American district in Houston, pulled off a strange upset victory in the race for Houston Community College Board of Trustees last week after he led voters to believe he was black.

Wilson distributed direct mail pieces, adorned with pictures of African Americans that Wilson admitted to pulling off the internet, that read “Please vote for our friend and neighbor Dave Wilson.” The fliers also claimed an endorsement by “Ron Wilson”—the name of a longtime African American state representative from the area, but also the name of one of Wilson’s relatives in Iowa. In the fine print, the flier noted “Ron Wilson and Dave Wilson are cousins.”

“He’s a nice cousin,” Wilson told KHOU. “We played baseball in high school together. And he’s endorsed me.”

Wilson, who did not deny the subterfuge, also produced the following radio ad:

Wilson appears to have deployed this strategy as something between a hail mary and a joke. “I’d always said it was a long shot,” he said. “No, I didn’t expect to win.” In the end, he claimed the six-year term by just 26 votes.

His opponent, Bruce Austin, a twenty-four year incumbent, called the strategy “disgusting.” “I don’t think it’s good for both democracy and the whole concept of fair play,” Austin said. “But that was not his intent, apparently.”

Austin is demanding a recount.

Watch a segment on Wilson, via KHOU: