Why Hillary Clinton is Right About Bernie Supporters and Sexism 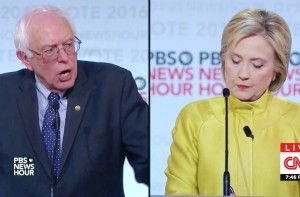 Excerpts of former Democratic nominee Hillary Clinton‘s forthcoming, post-election memoir, What Happened, are drawing wide attention for obvious reasons. 2016 was a dramatic year by any measure, and it doesn’t hurt that Clinton’s all but promised that, with nothing left to lose, this memoir will be the most unfiltered account by her yet.

In particular, an excerpt from her book released Tuesday has sparked massive debate, almost tuning out all the other criticisms of the book which range from how focus on Russia and James Comey distracts the Democratic party from instead focusing on the issues, to how some believe Clinton has failed to adequately take responsibility for her loss.

In this new excerpt, Clinton takes aim at Bernie Sanders, her rival in the primaries who’s made a name for himself as a progressive icon and has become something of a religious figure to left-leaning millennials. Clinton accuses Sanders of splintering the Democratic party by unfairly maligning it, and, further, accuses his supporters of sexism.

Here are some of the more controversial pieces of the excerpt:

“He certainly shared my horror at the thought of Donald Trump becoming President, and I appreciate that he campaigned for me in the general election. But he isn’t a Democrat — that’s not a smear, that’s what he says. He didn’t get into the race to make sure a Democrat won the White House, he got in to disrupt the Democratic Party. … I am proud to be a Democrat and I wish Bernie were too. …

“Because we agreed on so much, Bernie couldn’t make an argument against me in this area on policy, so he had to resort to innuendo and impugning my character. Some of his supporters, the so-called Bernie Bros, took to harassing my supporters online. …

“His attacks caused lasting damage, making it harder to unify progressives in the general election and paving the way for Trump’s Crooked Hillary’ campaign.”

Wow – "I am proud to be a Democrat and wish Bernie were, too." #ShePersisted pic.twitter.com/jSv7ilP5Nv

Of course, it’s worth noting that at least in this section, Clinton seems to ignore the good that Sanders did for the Democratic party, regardless of whether or not he identifies as a Democrat. That is, however much conflict his ideas brought to the party, this conflict yielded real change, which showed through in the Democratic party’s most progressive platform yet in 2016.

The platform called for a path to universal health care and marijuana decriminalization, as well as higher education for all and the goal of ending mass incarceration — even the end of the Hyde amendment, a once widely accepted, bipartisan law that prohibits federal funding for abortion procedures, and has jeopardized women’s health for generations.

Many of these ideas once seemed fringe until Bernie and his vocal supporters arrived on the scene. And it doesn’t hurt that he energized America’s progressive young who will canvas and vote, perhaps even launch campaigns for offices across the country, because of the powerful grassroots elements of Sanders’ 2016 campaign.

Clinton has taken heat from pundits and left-wing activists not only for criticizing Bernie, but for purportedly further dividing the party in doing so. They’re not necessarily wrong about this — the great Hillary vs. Bernie war of 2016 has had lasting impact on the party, both for better and for worse. And especially at a time when the party has become increasingly vulnerable — and at a time when its unity is needed more than ever before — her sharp criticism runs the risk of furthering this divide.

Nevertheless, this criticism is valid. Sanders has divided the party, and many of his supporters do espouse sexism, which only worsens when they ignore legitimate criticisms from feminists — or, worse, lash out with sexist attacks to deflect from accusations of sexism.

But Sanders did not divide the party merely by running, and Democrats should be thankful that he did run. Rather, he’s divided the party on whether or not identity-based oppression is worthy of being addressed, about whether or not abortion and LGBTQ rights are worth fighting for or should be conceded to win elections and elect economic progressives.

Sanders’ idea that the economy and an allegedly, inherently evil “political establishment” are the only things worth talking about, and everything else is a “distraction” from the “establishment” — essentially the argument Sanders made when Planned Parenthood endorsed Clinton in 2016 — has instilled a hostility to discussion of identity and women’s rights in his supporters. His rhetoric has sent the message that once socialism comes to America, all the other problems like sexual and racial discrimination will magically cease to exist, and as a result, his supporters have been led to believe that what they call “identity politics” is a smokescreen to distract from “real issues” — and, to clarify, in their eyes, women’s issues are not real issues.

Speaking of which, Clinton is right about another thing — sexism in Bernieland is a problem, and a serious one, at that. And it doesn’t just exist in the well-documented trolling and vitriolic, gender-based comments his supporters make toward female Clinton supporters on social media.

There’s a far more subtle but equally damaging sexism in Sanders supporters who hide behind their passive, action-less “pro-choice” stances in response to being confronted on their sexism, but simultaneously shrug off abortion rights and family planning resources as unimportant issues relative to the economy. The United States has the highest maternal mortality rates in the industrialized world, and with more and more success, lawmakers in states across the country are winning political battles to force women to give birth.

To real-life women, this isn’t a matter of identity politics — it’s their livelihood. You’d have to have never experienced identity-based oppression in your life to be able to call this a matter of “identity politics” rather than what it is — a national crisis around women’s rights that requires as much attention as pushes for universal health care. But regardless, without listening to women’s voices and grievances, many of Bernie’s supporters swiftly treat those who have the audacity to call attention to this issue to lofty, unsolicited lectures on the economy.

Bernie’s campaign brought the best and worst out of the Democratic party. Now, we have to move forward — but not without first understanding precisely what happened.