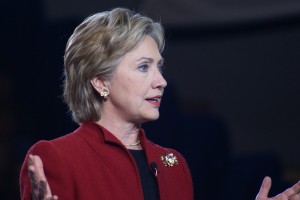 For many female supporters of former Democratic nominee Hillary Clinton, it seemed like more was riding on her victory than matters of policy. Climate change, reproductive rights, health care, the Supreme Court — so much was on the table, but there should be no shame in acknowledging that the symbolic value to other women, of a woman who had devoted decades to public service, whose devotion was constantly met with the backhanded sexism that’s all too familiar to any woman in the workplace or in the public spotlight, becoming president.

But of course, we all know what happened next, and Clinton will be tackling the cringe-worthy horrors, the feminist triumphs, and everything in between in her new memoir What Happened, to be released this September.

Here is the book’s summary, which in itself hints that the book will be an unapologetic, authentic criticism of patriarchal politics. From NBC:

“In the past, for reasons I try to explain, I’ve often felt I had to be careful in public, like I was up on a wire without a net. Now I’m letting my guard down.”…

The memoir is also billed as a “cautionary tale,” about the adversarial forces that might have had a hand in the “stranger-than-fiction” election.

The butt of many jokes even from liberals has always been Clinton’s caution, the polished, distant profile she constructed for herself that alienated many voters.

Of course, Clinton did her best to shine a light on this with a candid interview with Humans of New York from 2016, in which she offered an emotional explanation of why she constantly seems so emotionless.

The anecdote started how you might expect — Clinton and her female friends “were some of the only women in the room” taking a law school admissions test, and in the face of hotly emotional attacks. While the proctor was absent, men yelled to Hillary, “You don’t need to be here,” and even, “If you take my spot, I’ll get drafted, and I’ll go to Vietnam, and I’ll die.”

“But I couldn’t respond,” Clinton said. “I couldn’t afford to get distracted because I didn’t want to mess up the test. … I know that I can be perceived as aloof or cold or unemotional. But I had to learn as a young woman to control my emotions. And that’s a hard path to walk. Because you need to protect yourself, you need to keep steady, but at the same time you don’t want to seem ‘walled off.’ And sometimes I think I come across more in the ‘walled off’ arena. And if I create that perception, then I take responsibility.”

Sitting in the admissions exam room, Clinton braved the sexist, emotionally charged verbal attacks — an additional obstacle to taking the test that her male peers didn’t have to endure — with dignified silence, and this same dignified silence would go on to shape her political career for decades.

She didn’t stoop to responding to grossly sexist Monica Lewinsky jokes (one that was directed by then presidential candidate Donald Trump, himself), being called a “c-nt,” and a thousand other words that are painful to write, let alone be the target of. Today, if our president feels even vaguely slighted, he takes to Twitter within seconds to lash out.

Clinton’s memoir will tackle a host of other hot topics related to the election — Russia, James Comey, perhaps it will address the weaknesses of her campaign that contributed to her loss, as will. But certainly it will also talk about gender, and the unfair, contradictory demands that are made of female politicians, who must be strong, but not walled off, aloof, “inauthentic,” who must be qualified and astute, but not to be perceived as “establishment.”

I hope Clinton devotes at least a page of the memoir to a reflection on what it was like to devote decades of her life to advocating for women, children, and racial equality, only to be dismissed as “fake” and self-seeking because she didn’t yell and swear like Bernie, or encourage her supporters to beat up protesters, like Trump.

Surely most media and pundits will focus on her memoir’s discussion of Russian hacking, the emails, etc., etc. etc. But what I — and likely many women who closely followed Clinton’s campaign and character — look forward to most are her insights about what it takes to be a successful female leader in a patriarchal society, and if will even be possible to cultivate female successful female leaders in a patriarchal society.

The best part of all is that Clinton is promising to “let her guard down.” She’s had time to think, time to reflect, and has probably come to recognize that there’s nothing to lose, and everything to gain, by telling young women across the country the unadulterated truth about patriarchal politics.

The book will be available come September, and here’s a preview Now This posted to Twitter on Thursday: