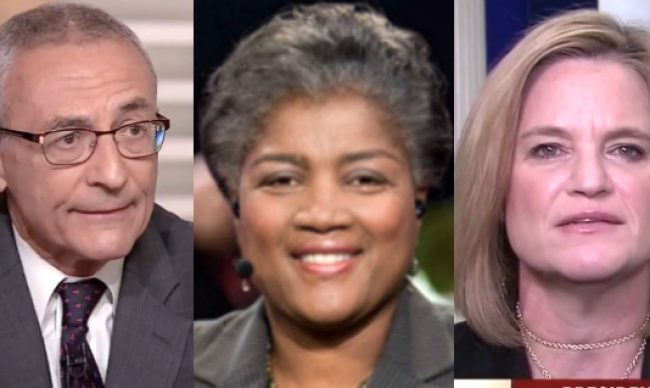 After the epic failure of the Democratic Party losing to a reality TV star in November there’s been (the predictable) talk among the party about reflection.

Over the last 24 hours, I’ve seen disgraced former DNC Chair Donna Brazile, Hillary Clinton‘s communications chairman Jennifer Palmieri, and Clinton’s longtime aide and adult fan girl Neera Tanden all on MSNBC to fear monger on the great Russian boogeyman and give their pearls of wisdom on how to resist President Trump.

Over on CNN, the network continues to book the same establishment Democrat pundits who graced the screens before the election. You know, the ones who were wrong about Clinton’s strength, Trump’s unpalatability, and how angry and economically hurting a substantial portion of  America is (easy to miscalculate when they all live in coastal bubbles).

One of the figures who led the pack of Democratic Party dummies was John Podesta, who WikiLeaks exposed as a ruthless, tone-deaf, and stone-cold political operative whose elitism and embrace of 1990s political thinking helped push an inauthentic, unpopular candidate like Clinton, while helping to smear a very popular Bernie Sanders. (For his great success, he landed a cushy columnist gig with The Washington Post.)

Don’t get me wrong: I’m not saying being politically inept and questionably corrupt means you don’t have the right to go out and earn a living. This Murderers’ Row of centrist, slayers for the status quo, have every right in the world to appear on cable news and in prestigious newspaper columns. More power to them.

The question is: Why does the corporate media, who sat stunned after Donald Trump became President Trump, reflexively go back to the same well that got everything so wrong rather than, gee, I dunno, book some progressive pundits who warned against the catastrophe lying ahead if the establishment pushed Clinton as the nominee.

Not to be a homer for my boss, but as Cenk Uygur wisely forecasted, “Iceberg right ahead!” as early as last summer.

But you don’t see Cenk on cable outlets or in The Washington Post much. Or Sanders national surrogate Jonathan Tasini, who loudly warned against a Clinton nomination and underestimating Trump; or Glenn Greenwald, whose website The Intercept did some of the best reporting on Clinton’s conflicts and corruption during the campaign (cable news will have him on only to fear monger and try and pound him into submission over Russia).

The list of other strong progressives whose political instincts were much sharper and correct than the usual suspects continuing to stain the airwaves is long: Kyle Kulinski of Secular Talk, David Sirota of International Business Times, Lee Fang of The Intercept, Michael Tracey of The Young Turks, Shaun King of The New York Daily News/The Young Turks, Amy Goodman of Democracy Now!, and many more. (Ironically, these figures probably view it as a badge of honor not to take part in the corporate-media-industrial-complex echo chamber, but that’s not the point.)

What corporate media is showing in its continual embracing of failed politicos who excel in regurgitating progressive-sounding platitudes but, in reality, love the big-money, Wall St. Democratic Party they’ve helped build, is that they themselves want the status quo.

Cable news, print, and digital would rather follow the day-to-day web of President Trump’s tweet storms and the resistance to him than focus on the exploding progressive movement swirling around this country (and winning many local legislative seats).

And why wouldn’t they? These failed pundits are their friends: As WikiLeaks showed, Chuck Todd held Jennifer Palmieri’s birthday party at his home during the campaign; bigger picture, the revolving door between anchors and columnists and pundits and operatives has been wide open for years.

As I exposed, Donna Brazile was literally feeding questions to the Clinton campaign while working as a CNN contributor — so naturally, MSNBC had to have her after her DNC Chair position ended!

For the Americans who still consume traditional news on TV or in newspapers, the result of being continually exposed to these failed politicos — who keep passing on their failed ideas and thinking — is the status quo remaining.

After all, why would voters choose something different if they have no idea there is a progressive movement exploding all around them.