Winners of the Week: O, Lowe, Stewart, the Voice of Conservatism, and the American Public

Winners of the Week: O, Lowe, Stewart, the Voice of Conservatism, and the American Public 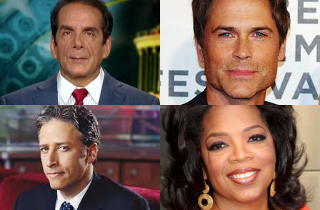 A total of six finalists emerged from very different places to take home our imaginary (there’s that word again) hardware.

Rob Lowe: The star of 80s classics Oxford Blues, Youngblood, St. Elmo’s Fire and Class popped up on Piers Morgan on Tuesday night. And despite inching toward the big 5-0, the effing guy looks almost EXACTLY THE SAME.

But the reason Lowe wins the week was his utterly refreshing perspective regarding the gun debate.

“The last thing viewers want is another Hollywood actor telling them anything about guns – pro or con,” explained Lowe. “I’m a sportsman, you know, and I shoot skeet and I grew up in the Midwest, so that’s a part of my culture. So, I understand them in a way that perhaps people living in more urban areas don’t have that history.”

In other words, the pulse of the country doesn’t begin and end in California and New York…

Lowe went on to calmly state that he would support an assault weapons ban, but maintained the problem doesn’t stop there…citing parenting responsibility around child exposure to violent video games and the confiscation of guns already in the hands of “law-abiding citizens” as being “problematic.”

Overall, a lucid, centrist argument presented in a civilized manner.

There’s hope for cable news yet.

But besides making the former Queen of Daytime relevant for a week, it also helps in the following area below, which is crucial for her struggling network’s long-term success:

Admit it: If you tried to tune in to the Armstrong confession on Thursday night, you had trouble finding Oprah’s network (OWN) on your channel guide. Fact is, OWN is in its OWN world on the dial, and nowhere near other highly-rated women’s networks like Lifetime and Bravo.

The exposure that the Armstrong interview will help OWN move up the dial, but she still may be one blockbuster away from sealing the deal (Manti Te’o, you have a call on line three…)

In the other, Jon Stewart (and something like 26 of the best political-comedy writers on Earth)…

The debate: Whether or not the creation of a trillion-dollar coin can help circumvent the debt ceiling.

To review, Krugman didn’t appreciate Stewart mocking the idea of a solution he supports, declared that Stewart is “ruining his own brand,” and, “if we want this kind of intellectual laziness, we can just tune into Fox.”

Stick to your day job, Paul. Especially after Stewart countered with this:

If the two can debate this face-to-face on The Daily Show, a ratings bonanza would surely follow. But the acrimony appears to extend further than a trillion-dollar coin, as Krugman hasn’t appeared on the show in over seven years.

For once again outhustling the mainstream media and breaking the biggest (and strangest) off-the-field sports story since Tanya Harding.

Free advice for Manti and Notre Dame: Just say you’re done with the story. There’s no crime here, no victim and therefore no reason to talk about it again. By going that route, there’s not damn thing law enforcement or the media can do about it.

If there’s anyone both more respected and influential on the right than Fox’s Charles Krauthammer—doesn’t matter if we’re talking politicians, pundits or radio hosts—feel free to share names in the comments section.

So while Republicans continue to struggle with their counterargument to the President’s insistence on raising the debt ceiling, they would be wise to listen to Krauthammer:

“Don’t force the issue when you don’t have the power,” he warns. “The more prudent course would be to find some offer that cannot be refused, a short-term trade-off utterly unassailable and straightforward. For example, offer to extend the debt ceiling through, say, May 1, in exchange for the Senate delivering a budget by that date — after four years of lawlessly refusing to produce one…it would (a) highlight the Democrats’ fiscal recklessness, (b) force Senate Democrats to make public their fiscal choices and (c) keep the debt ceiling alive as an ongoing pressure point for future incremental demands.”

From the GOP perspective, it’s worth trying after being completely outmaneuvered by the White House in the Fiscal Cliff negotiation.

With Mitt Romney’s deflating loss in November, John Boehner seen as damaged goods, and Rush Limbaugh seen more as a polarizing entertainer than strategist, Republicans would be wise to turn to Dr. Krauthammer for counseling.

Thanks to almost all of you for NOT tuning into the season premiere of HBO’s Girls. Part soft-porn trash, part Lena Dunham infomercial, the show is the toast of Hollywood and most of the media.

“One of television’s greatest shows!” exclaims the Hollywood Reporter.

But one problem: Despite all the love from New York and Hollywood-based major media outlets, viewership slightly declined for the Season 1 premiere to the Season 2 premiere (only 866,000 viewers for its first run Sunday, which was good enough for a distant fourth place against three Showtime shows on the same night). By the way, HBO is in eight million more homes than Showtime).

You would think a show with this much hype from an adoring press would soar. But at least for its big opening night on Sunday, it flopped.

So why am I hating on a show nobody watches?

Simply put, I live in Hoboken (NJ), which happens to be the #1 city for singles in the country (Bloomberg 2012 study). There’s a bar on every corner, it’s minutes from NYC…we’re likely not too different from Dunham’s Brooklyn. That said, and having written dozens of columns on all aspects of singledom, Dunham’s portrayal of the moral bankruptcy and aversion to responsibility the show proudly flaunts is both shamefully inaccurate and WAY overblown.

Girls won big at the Golden Globes, largely more from shock value than anything enduring or culturally significant.

But don’t take my word for it…

Just look at the numbers.

winners of the week
Tips