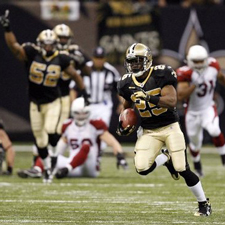 Regardless of the outcomes of the two playoff games this weekend, the Super Bowl will have plenty of compelling story lines. Mediaite presents a four part series where we tell you who’s left in the NFL playoffs, why they matter, and what the media will not stop talking about if they earn a trip to the big game (part one can be found here). Now, we take a look at the New Orleans Saints.

What You Need To Know: The Saints have had very little success since they were established in 1967. In fact, one could argue that they’ve had no success. They are one of five teams to have never played in a Super Bowl, and things have been so bad in the past that fans have worn paper bags over their heads. Then along came Drew Brees. Now, nobody is ashamed to wear the black and gold, and that includes Brad Pitt. 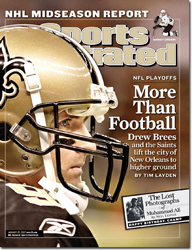 Who Matters: Drew Brees, quarterback of the Saints and media-appointed savior of post-Katrina New Orleans. Reggie Bush, the running back who will (maybe) propose to girlfriend Kim Kardashian if the Saints win the Super Bowl. Jeremy Shockey, the most widely reviled player on an otherwise likable team. The SuperDome, which has gone from being a symbol of despair to the best home field advantage in sports.

The Potential Angle(s): Katrina. The team was a symbol of hope after the hurricane, and that’s when they were still losers. And as much as the public would get sick of a profile on every single person that was: a) effected by the hurricane, and b) cheers for the Saints, most would agree that a Super Bowl victory for the people of New Orleans would be pretty awesome.

If They Win, The Media Would Love To See Them Play: Peyton Manning and the Indianapolis Colts. Peyton’s dad, Archie Manning, is the greatest Saints player of all time (which is kind of like being the greatest Jamaican bobsledder of all time, but still), and the Mannings are an institution in Louisiana. The Colts, being one of the most successful teams of the decade, would also provide the perfect foil to the Saints’ historic futility.

If They Win, The Funnest Super Bowl To Watch Would Be: Peyton Manning and the Indianapolis Colts. If you find yourself in the unfortunate, but statistically likely, position of not having your favorite team in the Super Bowl (or not having a favorite team at all!), then this is the matchup for you. The Colts have won before. The Saints haven’t. Watching perennial underdog Drew Brees try to outduel the most endorsed athlete in sports, and win one for the people of New Orleans, would be the best kind of drama.

Next, we’ll preview the Indianapolis Colts. And, if you want to instantly grow hair on your chest, check out Drew Brees’ pregame warmup ritual below: