After 10 Years of Investigating the Penn State Scandal, Here Is What the Case Taught Me About the Modern Media 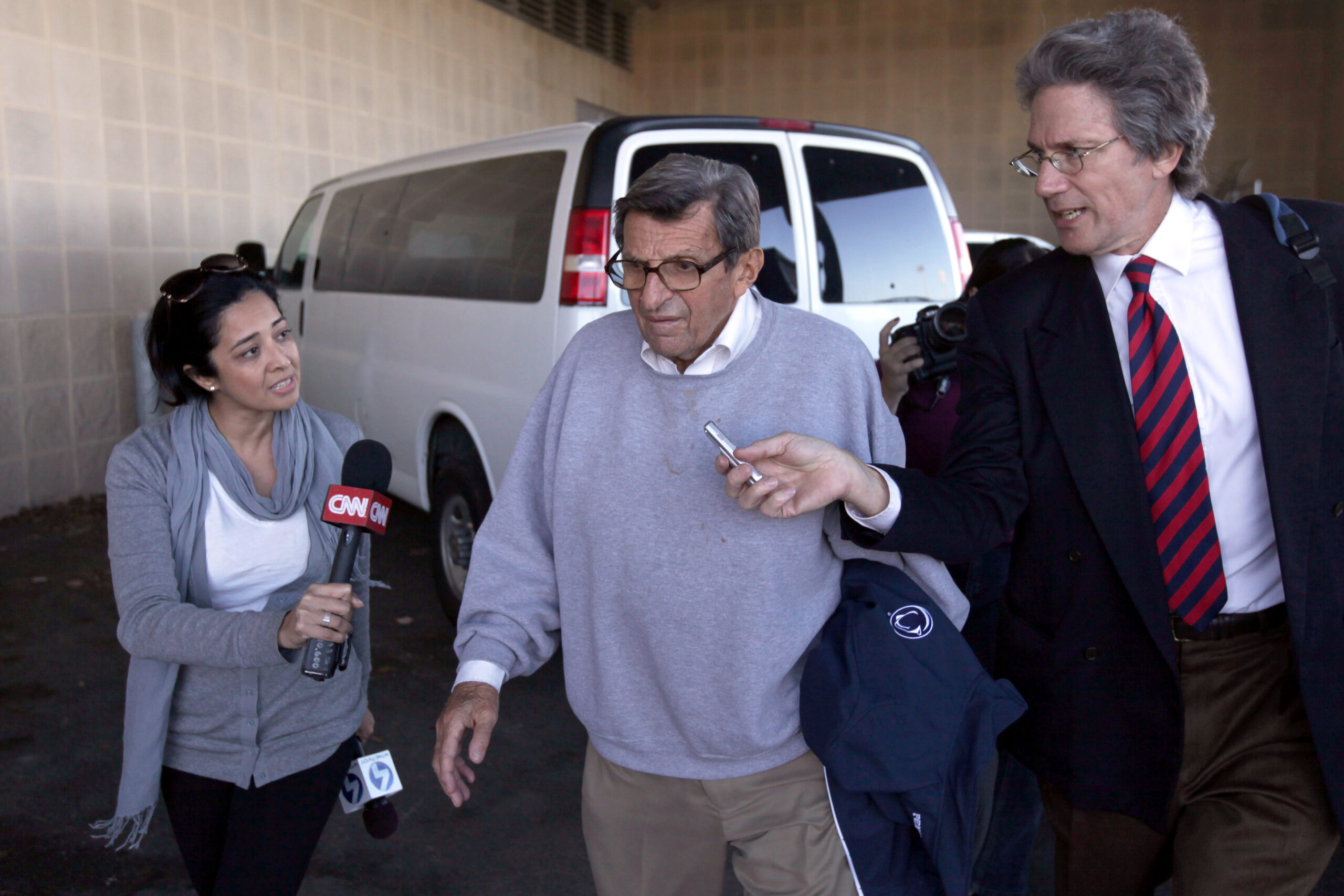 Ten years ago this week, a spectacular news media-induced firestorm was ignited in State College, Pennsylvania, after former Penn State assistant football coach Jerry Sandusky was arrested on numerous charges of child sex abuse. As a result, Sandusky and three previously highly-respected school administrators eventually went to jail, Penn State’s legendary head coach Joe Paterno was fired in disgrace and died soon after, and the once sterling reputation of the university was forever tarnished.

For most of the past decade, I have been, almost entirely on my own, deeply investigating the entire case, to the point where it is not an exaggeration to say I know more about it than anyone, including Sandusky himself. What I have found has been the most shocking, depressing, and excruciating experience of my already eventful career, because I eventually became, very much against my own self-interest, completely convinced that, believe it or not, the media got this story catastrophically wrong and that those convicted at Penn State, including Sandusky himself, should not have been.

This column is not about trying to convince anyone of this conclusion. I have co-hosted a podcast called, “With the Benefit of Hindsight,” which features at least 25 hours of often mind-blowing, raw and exclusive interviews with many of the primary figures in the case, including two of the administrators who went to jail (the podcast was inspired in part by author Malcom Gladwell writing a chapter in his best-selling book, “Talking to Strangers,” which largely focused on my work).

My purpose here is to document some of the important things I have learned about the news media throughout this ordeal. Here are those lessons, many of which have served me well in evaluating both the Trump and Covid media eras, and may be more significant and relevant than even the massive injustice which I am positive occurred in this Greek tragedy.

In a Panic, Question Everything: When things move fast in an emotionally charged story which causes a moral panic, the modern news media is not equipped to properly handle it. So much of what were told was a fact ten years ago this week turned out to be either false, or at least greatly distorted.

Once a Narrative Is Set, Look Out: In a hyper-charged and complex story, the media coverage during the first couple of days is extremely important because it sets the narrative through which all subsequent information will be filtered. Once that narrative is fixed, the bigger the story, the more difficult it is to reverse it because everyone becomes deeply invested in that plot. Effectively, it becomes “too big to fail.”

The Modern Media Is Really Like the Movie Business: Nonfiction movies used to say they were “based on a true story.” Today the dramatic license is so great that they usually are “based on made-up events which could theoretically have happened.” In many ways, on big stories the news media now takes fragments of information and cobbles them together in whatever way makes the most compelling narrative.

Social Media Fuels False Narratives: In a media universe ruled by Twitter, if your “truth” can’t fit in a tweet, it is irrelevant. In this case, “Jerry Sandusky abused boys and Joe Paterno/Penn State covered it up!” was ready-made to go viral. Since social media is inherently driven by popularity and not truth, combating a compelling/simple lie with politically-toxic/complex truth is impossible.

On “Third Rail” Topics, the Defense is Inherently Disadvantaged: It has been famously said that a lie can get halfway around the earth before the truth can get its pants on. This is particularly the case in situations where even those to whom the conventional narrative makes no sense are terrified of being seen as “pro child abuse” if they speak out too soon. Consequently, by the time those predisposed to push back against a rush to judgment finally feel confident that the factual record really is on their side, it is too late because the public, the media, and the judicial system have already moved on.

Emotional Investment Causes One-Sided Reporting: Because the media was SO sure that they immediately knew what really happened in this story, and because that conclusion made this clearly a tale of good vs. evil, they felt completely justified in providing comically one-sided coverage. Once they became deeply entrenched in that stance, there was no going back because it was not in their self-interest, and they had completely closed themselves, and the public, off from an alternative factual record.

When everyone in the Media Agrees, There is a Problem: When a story is complicated and has two sides (to this day Jerry Sandusky has never confessed, and is still vigorously appealing his conviction), there should never be 100% lockstep agreement in the media about what is happening. Heck, no one was ever guiltier than O.J. Simpson, and there was zero conformity to the media coverage of that situation. The only way you get total unanimity of perspective in this era is if it is happening due to corrosive artificial factors.

If a Narrative Makes No Sense, Something is Very Wrong: One of the biggest red flags in this story was that the official narrative never made any sense and, to this day, no one who backs that storyline has even tried to tell the full plot of what happened here (even the reporter who won the Pulitzer Prize for breaking the story has never written a book about it). Whenever the math doesn’t come close to adding up, it is a clear sign of a problem.

The Media Can Impact the Judicial System Far More Than Realized: Everyone knows that massive media coverage can impact a future jury, but even the media itself either doesn’t understand, or doesn’t care, how much they can influence the entire judicial process. In this case, the topic became so incredibly toxic that the accused couldn’t even mount legitimate defenses, huge protection and motivations were provided to the accusers and prosecutors, and even judges, who are elected in Pennsylvania, clearly felt the pressure to produce the expected verdicts.

The Modern Media Would Have Backed the Salem Witch Trials: I used to believe that the news media could be counted on to protect the due process rights of even those accused of the most heinous crimes. In this this situation, that did not happen. Instead, the media had their pitchforks out from the beginning, and, out of a fear of seeming to defend the indefensible, never even reported on the miscarriages of justice which occurred.

The Pendulum On Abuse Cases Has Swung Too Far: There is little doubt that, decades ago, the media rules for evaluating sex abuse cases were set up to protect the accused too much. Now, thanks to what may have been a well-intentioned over-correction, it is hard to understand how any defense against the heinous charge of child sex abuse can possibly be effective. I have asked my many critics hundreds times what would be evidence of a false story, and I have still never gotten a coherent answer.

The Media Fundamentally Misunderstands Academia In Abuse Cases: It has always baffled me that the news media fails to understand that academic institutions, especially those which are state-run like Penn State, have a massive DIS-incentive to defend themselves in these situations (and potential accusers have clearly figured this out). They are run by liberals who get to give away other people’s money to make themselves look good in the media, all while self-flagellating at the expense of people who almost always are no longer at their school. When they cave and don’t defend their institution while paying out large sums to alleged victims, it is not evidence of guilt.

The Media is Awful at Understanding Incentive Structures: Not only was the media very heavily influenced by grossly misinterpreting Penn State’s “guilty plea,” they did the same thing with Penn State fans and the Paterno family itself. Everyone directly involved in this had a perverse incentive to immediately accept that horrible things happened without solid evidence that they actually did. Once they went down that path in a panic, there was no way to reverse it.

Virtue-Signaling “Journalism” Is Very Real: Of all the many shocking exchanges I have had with mainstream reporters in this case, none was more telling than the one I had with USA Today columnist Christine Brennan, who I once considered a close friend. She explained to me that she knew her coverage of the story was “good” because it was “popular.”

Everyone in the Media with Something to Lose is a Coward: One of the many reasons that unpopular truths have no shot in today’s media environment is that any media member with the power to go outside of the media herd has too much to lose by doing so and risk getting run over. In this case, Malcom Gladwell, whose entire brand is that of a courageous contrarian, is the exception which proves the rule, as even he seems petrified of fully expressing his true views of the case.

It is Far Easier to Dupe the Media than to get them to Admit they Were Duped: The media was willing to revisit and eventually help fix the Duke Lacrosse and Jussie Smollett scandals because they hadn’t put ALL their chips down on them. In this case they went ALL in.

“Experts” Are Often Very Conflicted and Wrong: Routinely in this case, the media relied on sex abuse “experts” with no direct knowledge of the case and an obvious incentive for every allegation to be believed without vetting. But even that wasn’t as ridiculous as their reliance on civil attorneys representing accusers (a few of whom personally ended up tallying several dozens of millions in settlements) as somehow being remotely objective “experts” on the case.

Turning One Reporter into “The Source” is Very Dangerous: It can’t be overstated how much reliance the media put on the reporting of then 24-year old local newspaper reporter Sara Ganim, who would end up getting the Pulitzer Prize. Since then, nearly everything about her career (including a flameout out CNN, and her new podcast related to this case which is so absurd that I have offered her $10,000 to her charity of choice if she will simply interview me about it) should make people gravely question if the reliance on her sent everyone in the wrong direction at the start.

Stories Which Fit the Media’s Narrative/Agenda Are Not Vetted: One of the fundamental problems in this story is that there was never adequate vetting, partly because everyone assumed that someone else had done the scrutinizing. Then once the narrative was very quickly set, any further vetting was deemed to be totally unnecessary.

Going Against A Media Tidal Wave Just Isn’t Worth It, Even When You Are Right: The work I have done on this case is by far the best of my life, and, frankly, the most remarkable I have ever heard of in the modern era. However, getting involved in this story was also the worst mistake of my error-prone career, which should tell you just how incredibly broken the modern news media really is.