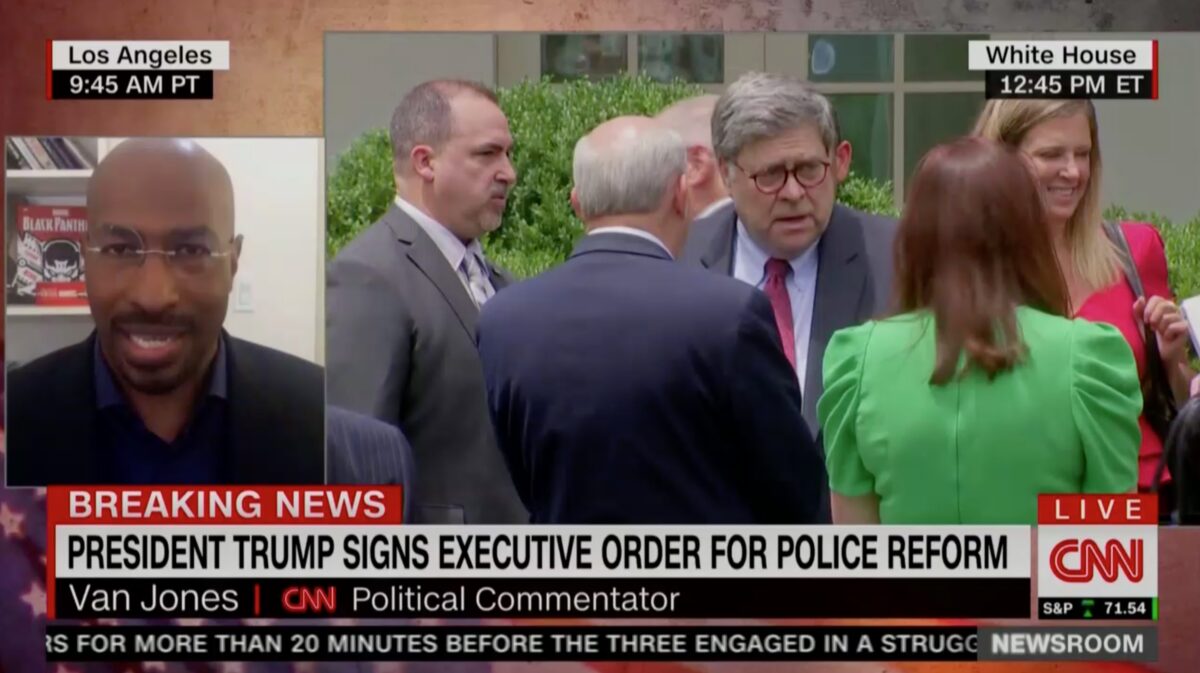 CNN’s Van Jones was involved in crafting President Donald Trump’s new executive order on police reform, according to a new report, and failed to disclose his involvement while praising the order on air.

The Daily Beast’s Lloyd Grove reports that Jones attended “secret White House meetings” with Jared Kushner in recent weeks while the White House was under pressure to address calls for racial justice after the death of George Floyd. The report says Jones worked with law enforcement officials and White House staffers in order to help frame the police reform initiative Trump that signed in mid-June.

“I find that in politics, people get in uncomfortable situations, and that’s when you get to see what a person’s character really is,” Kushner said to the Beast. “And in a tough situation Van has shown me that he’s got true character. He’s focused on the right things.”

The report goes on by exploring the history of Jones and Kushner’s friendship, and how it seemed to culminate with their alignment on Trump’s 2018 criminal justice reform bill. It also touches on critics of Trump’s executive order, who argue Jones’ attempt to work with the president will ultimately be a fruitless endeavor.

Some praised Jones for placing a bipartisan result ahead of whatever objections he has to the Trump administration:

Van Jones is pretty much the picture-book example of a guy who you want to work with, despite knowing that you’ll never vote for the same candidates. He has proven over and over that he just wants to find something to agree on that gets something done. https://t.co/MbVa4OOqtG

If you were given a chance to find a cure for a disease which would save your family but it meant working w/ people who you don’t agree with..Would you? @VanJones68 saw an opportunity to do what was best for society not politics. Disappointed to see backlash against him. https://t.co/Ch1jaavzSX

I disagree. I commend @VanJones68 for reaching across the aisle to champion issues he cares about. We need more bipartisanship not less. Extreme divisiveness won’t solve our nations problems. Being able to find common ground will. @CNN #PoliceReform @WhiteHouse https://t.co/1heygbtIU4

Others, however, panned the CNN commentator by calling his actions an ethical dilemma for CNN, or alternatively, flat out slamming him for working with Trump for minor results.

If Van Jones wants to work in politics and partner with the White House, that’s his call. But it is unethical to laud legislation you were involved in crafting while failing to disclose your involvement while on the news network that pays you to be a pundit.

Van Jones either needs to work for the White House or CNN. Not both. https://t.co/lDiR2NrKMf

If Van Jones wants to help craft policy that’s certainly his right. Not disclosing that fact to viewers or the network? Hoo boy… https://t.co/vFFHPf6AZm

CNN policy is for contributors to reveal any potential conflicts of interest. That way, either you are walled off from speaking on it or they are aware and can inform the audience. It allows transparency and it’s ethical. Van Jones should have told them, assuming he didn’t.

I remember seeing JARED KUSHNER recently on @VanJones68 show and thinking how weird it was and why he would have him as a guest.

And @VanJones68 was awkwardly complimenting Kushner throughout.

Now we all know why.

UPDATE – Jones has issued an emphatic rebuttal to the report

(1/5) This @TheDailyBeast article is based on false, sensational charges — apparently designed to get clicks, shares, and likes. I haven’t even visited DC since before the pandemic started — let alone been inside the White House.

(3/5) When I meet with folks at The White House, I say so during relevant coverage on-air — as I did all through 2018, when I worked on criminal justice reform.

(5/5) I will continue to openly work across the aisle to help those trapped in the justice system. We need more of that these days, not less.