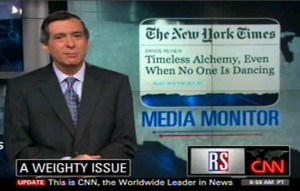 On Sunday’s Reliable Sources, The Daily Beast’s Howard Kurtz waded into the recent flap over New York Times ballet critic Alastair Macaulay‘s dig at dancer Jenifer Ringer‘s weight in his review of The Nutcracker. Macaulay’s observation that “Jenifer Ringer, as the Sugar Plum Fairy, looked as if she’d eaten one sugar plum too many” prompted a rebuke from Jezebel’s Margaret Hartmann, but Kurtz thinks Macaulay was “well within his journalistic rights.”

He also seems to go along with Macaulay’s assessment that’s he’s a victim of sexism, because those who objected to the Ringer quip ignored his shot at a male dancer. Howie, we  have a problem.

Here’s the clip, from Sunday’s Reliable Sources on CNN:

It is tempting to dismiss this whole thing by reminding Alastair Macaulay that if he wishes not to be called out for being a prick, then perhaps professional prick is the wrong career choice. Whether he knew about Ringer’s struggles with eating disorders is irrelevant, but once he was informed, what kind of prick doesn’t then apologize? This kind:

Ms. Ringer has spoken in the past about coping with eating disorders. Some of my correspondents feel I should know this history of hers, just as others have on occasion written to explain which ballerinas have histories of scoliosis. I think otherwise. Dancers do not ask to be considered victims.

That’s fine, he should get a pass for not having intensively researched his off-handed quip. He could even be forgiven for not knowing that eating disorders have the highest mortality rate of any mental illness, or that the mortality rate associated with anorexia nervosa is 12 times higher than the death rate associated with all causes of death for females 15-24 years old. Furthermore, as Jezebel concedes in their rebuttal, Macaulay has a point that a dancer’s weight can be relevant to her performance, but he has a duty to explain how. He’s also probably right that “Dancers do not ask to be considered victims.”

What is offensive is that Macaulay is asking to be considered a victim, of sexism:

Notably, the fuss has been about Ms. Ringer’s appearance. No one took issue with what might be considered a much more severe criticism, that the two danced “without adult depth or complexity.” And though I was much harder on Mr. Angle’s appearance, scarcely a reader objected. When I described Nilas Martins as “portly” in The New York Times and Mark Morris as “obese” in the Times Literary Supplement, those remarks were also greeted with silence. Fat, apparently, is not so much a feminist issue as a sexist one. Sauce for the goose? Scandal. Sauce for the gander? No problem.

In accusing his critics of sexism, Macaulay ignores the fact that the playing field for “widely accepted ideals of beauty” (his phrase) is far from even, and that it is those distorted ideals which contribute greatly to a deadly epidemic that disproportionately affects women, particularly adolescent women, by a 7 to 1 margin.

Kurtz, for his part, was just trying to be a good referee here, but he had a duty to point out that Macaulay’s “sexism” charge was bald nonsense, and he missed an opportunity to elevate this feud by shining a light on the consequences of our culture’s sexist weight norms on women, especially adolescents. Instead, we’re asked to show Sympathy for the Devil because his doctor made him lose 20 pounds:

My own history makes me intimately aware of what it is like to have a physique considerably less ideal than any of those I have mentioned. Acute asthma in childhood gave me a chest deformity that often made me miserable into my adolescence. (It was ameliorated by major thoracic surgery at age 20.) On my doctor’s advice, I lost 20 pounds last year.

I can’t wait to hear his speech to Haitian earthquake victims, in which he commiserates about how the F Train sometimes rattles the windows of his breakfast nook.