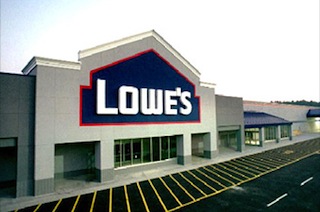 On Monday, when we first covered the controversy over Lowe’s relenting to pressure and pulling its ads from TLC’s All-American Muslim, I wrote “Here’s a fun experiment. Let’s find out what hurts a company more; advertising in front of a TV show that features Muslim people or cowardly kowtowing to bigots!” At the time, I was being fairly facetious, assuming the whole sickening episode would be forgotten by late afternoon. However, this story has had surprising legs and has built up an impressively big backlash against Lowe’s. Now, The Star-Ledger, the largest New Jersey newspaper, has called for a boycott of the hardware store chain in a blunt and forceful editorial.

I guess siding with bigots isn’t a path to success, after all?

The editorial, entitled “Retailers like Lowe’s must withstand hate group’s intolerance,” begins by describing the group that Lowe’s buckled for:

“They call themselves Christians, but the evangelical group that demanded Lowe’s home improvement chain yank its television ads from a reality show about Muslim families sounds more like a club for bigots.

The Florida Family Association describes itself as a coalition of God-fearing Americans. Yet instead of preaching values such as tolerance or humility, or performing community services such as feeding the hungry, it devotes most of its energies to attacking Muslims and gays.”

It then ends with a simple declaration:

“For as long as Lowe’s continues to “defer” to discrimination, let’s boycott this chain.”

So, Lowe’s may be getting just what they feared in the first place; a boycott. And the other corporations who have pulled advertising (although there are less than the Florida Family Association wants you to believe) have faced similar condemnation. Should these companies be worried? Sadly, probably not. One needs only look at the editorial’s comments section to see why not:

‘Not only will I not boycott Lowe’s, I am gong to make sure to give them as much of my business as I possibly can.

First of all, Lowe’s has the right to pull their advertising if they want to. They are paying for it, not you.

Secondly, that Christian group is absolutely right. “American Muslim” IS propaganda. As long as this show ignores the very real threat that Islam is to the U.S., it can’t be called anything else. Many in the Islamic world have declared war on the U.S, in case you missed that. And the people who have done so are not just some crazy fringe element of the muslim world, they are many of it’s LEADERS. And many of them are right here in the U.S.A.'”