Man Up, Newsweek, and Put The Silly “Men In Decline” Meme In Context 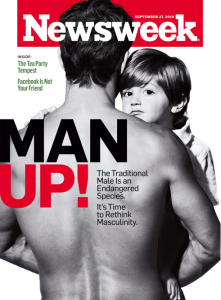 Newsweek writes about men this issue, in a cover story by two young male writers, Andrew Romano and Tony Dokoupil, both of whom are very good. Their thesis is that hewing to traditional male roles is holding men back in the modern era, and the time is now for men to boldly go into a more evolved – maybe even more womanish! – version of “manhood.” I don’t disagree that there is more opportunity where restraints are relaxed and diversity is encouraged – duh. But I challenge the framing of the issue: That men are in crisis, on the decline, and “going off the rails.” In fact, the framing of the male-female ratio as being more ‘dangerous’ to men as it equalizes or, in some (very limited) situations, inverts, is not only wildly skewed but also completely fails to appreciate, consider and include the full context – i.e. how gender parity might actually be better for all concerned. Actually, it doesn’t completely fail to appreciate, consider and include – there are a few nods to that reality, buried deep in the article and in one glaring case, at the end of the second-last paragraph. There was also no – absolutely no! – reference to or inclusion of gay men (and/or women) in this piece. Staggering, frankly, in this day and age.

Here’s the thing: I know that Romano and Dokoupil had the best of intentions with this piece, to promote a more holistic version of what it means to be a dude in 2010 and to explode – not promote – the silly stereotypes of yesteryear. But whatever their thesis, I am going to want to see assertions supported by fact and conclusions put forth in context. There was a lot of that missing here. (And honestly, I would give their assigning editors more than a little share of responsibility here, too.) And even though the piece neglected to mention gay men, I saw it all through the piece in the shadow version in my head. The so-called “traditional” version of manliness has not traditionally been kind to gay men, either. (Listen to the last line of this song – satirical, but still – for one example.)

Okay, so maybe that was more than a few holes. But look! A shirtless man holding a baby! Awwwwwww.