What Megan Fox Has In Common With Barack Obama

What Megan Fox Has In Common With Barack Obama 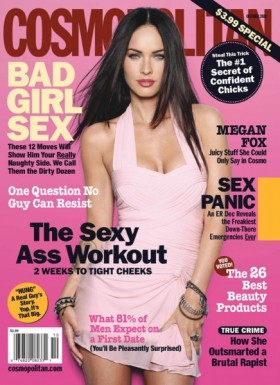 You heard me. Aside from being an object of reverence for millions and having a rather shayna punim, these two have something very specific in common, tied to recent events. Yes, Megan Fox may give boys the kind of heart palpitations requiring proper health care, and yes President Barack Obama may be accused of feeding on the taxpayer like a bloodsucking socialist vampire, but actually it’s far more mundane than that: They’re both pretty expert at packaging — and using — their soundbites.

We pointed that out about Obama yesterday, noting how similar his answers were to John King and George Stephanopoulos for his El-Completo-Ginsburg-Sunday-show-blitz. But then we noticed that, for all the kerfuffle about the pay-to-read Megan Fox Rolling Stone cover, she’s on the cover of Cosmopolitan, with a coverline advertising “Juicy stuff she could only say in Cosmo!” Well…not quite.

Here’s Megan Fox in Rolling Stone, talking about her “powerful, confident vagina”: “Men are scared of vaginas…[a woman is most powerful when she is] completely in charge of her sexuality.”

Here’s Megan Fox in Cosmopolitan, talking about the power of — yep — vaginas: “Women hold the power because we have the vaginas. If you’re in a heterosexual relationship and you’re a female, you win.”

Fox also talks in both magazines about using that power to mess with men’s heads, saying in RS something to the effect of, she has harnessed her sexuality and knows how to use it to mess with men’s heads. (Paraphrased from scanning it earlier in a Duane Reade.) This, however, is backed up by what she told Cosmo: “It’s fun when someone intends to put you in his back pocket, but instead, he walks away wounded. I make it a mind game so they don’t know if I’m hitting on them or mocking them.”

Rolling Stone’s Erik Hedegaard also asks her, twice, if she’s ever drawn blood during sex. She responded by being “stonily silent.” Cosmo asked her about her ideal date. She responded with a Rosh Hashanah gift to Jewish men for the ages: “A sexy sandwich with Andy Samberg and Jonah Hill.” Verdict: Cosmo FTW!

To clarify: Barack Obama does not have that last bit in common with Megan Fox. And we’re sure he likes Michael Bay just fine.

Upshot: Both Cosmo and Rolling Stone were a-twitter about their Megan Fox exclusive, but as we have seen in the past, Megan Fox doesn’t reeeaaaallly seem to care about what she says. But hey, it’ll sell magazines.