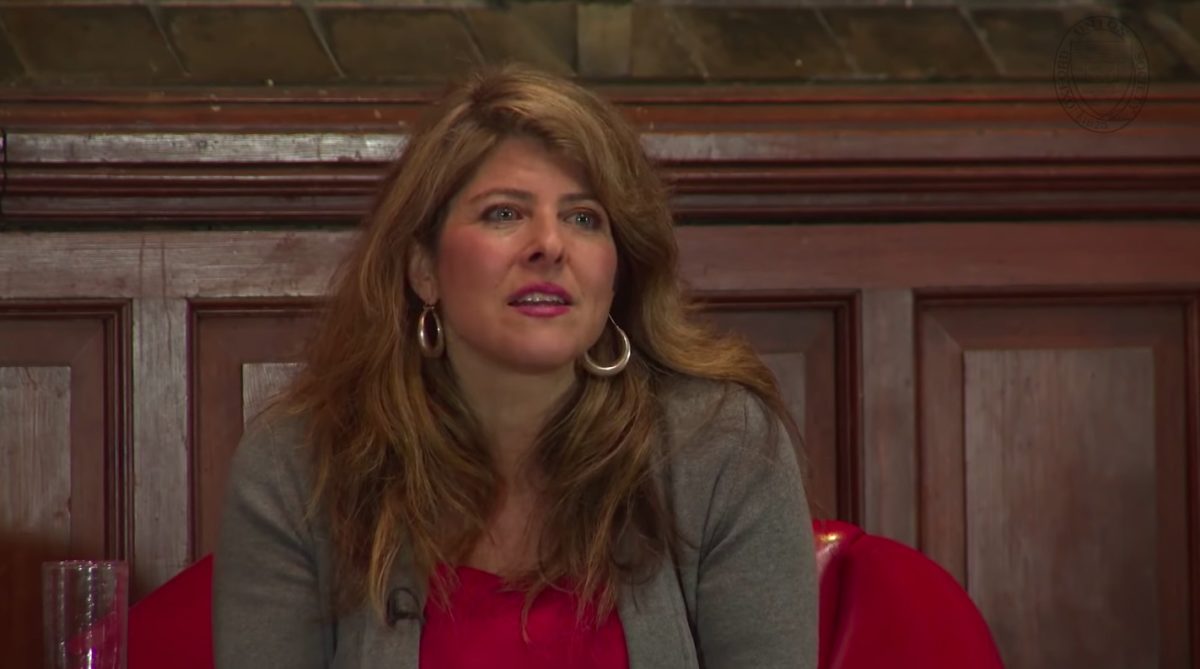 In one of the most painfully awkward interviews in recent memory, progressive author Naomi Wolf appeared on the BBC 3 to promote her upcoming book, Outrages: Sex, Censorship, and the Criminalization of Love — only to be informed by the interviewer that her soon-to-be-released work is entirely based on Wolf’s own misunderstanding of a dated legal term.

The New York Times best-selling author’s latest book “illuminates a dramatic buried story of gay history—how a single English law in 1857 led to a maelstrom, with reverberations lasting down to our day,” per its description on Amazon.

“Before 1857 it wasn’t ‘homosexuality’ that was a crime, but simply the act of sodomy. But in a single stroke, not only was love between men illegal, but anything referring to this love became obscene, unprintable, unspeakable.”

During a radio interview with the BBC’s Matthew Sweet yesterday, Wolf — as well as the rest of the world — found out that her new book is wildly fallacious. The interview quickly went viral.

Everyone listen to Naomi Wolf realize on live radio that the historical thesis of the book she’s there to promote is based on her misunderstanding a legal term pic.twitter.com/a3tB77g3c1

“I found several dozen executions,” Wolf said — referencing men who she believed were executed in Britain in the 1800s for sodomy. “[This] misapprehension that is in every website — that the last man was executed for sodomy in Britain in 1835.”

“I don’t think you’re right about this,” Sweet replied, before reading off a portion of her book in which Wolf writes: “Teenagers were convicted more often. Indeed, that year, 14-year-old Thomas Silver was actually executed for committing sodomy, the boy was indicted for an unnatural offense, guilty, death recorded. This is the first time the phrase unnatural offense entered the Old Bailey’s records.”

“Thomas Silver wasn’t executed,” Sweet explained. “Death recorded — I was really surprised by this and I looked it up — death recorded is what’s in most of these cases that you’ve identified as executions. It doesn’t mean he was executed it was a category that was created in 1823 that allowed judges to abstain from pronouncing a sentence of death on any capital convict that saw to be a fit subject for pardon.”

The host went on to present records showing the date of the man’s discharge, even though Wolf identified him as executed.

“When I found this I didn’t really know what to do with it, because I think it is quite a big problem with your argument,” he added.

As it turns out, Sweet may have buried the lede — not only is Wolf’s writing on this case based on her misunderstanding of legal terminology, she was also defending a teenager who sexually assaulted a small child.

“It’s the nature of the offense here,” the BBC host noted. “Thomas Silver committed an indecent assault on a six-year-old boy. And he served two-and-a-half years for it in Portsmouth prison, which doesn’t seem too excessive really.”

Sweet also noted that it appears none of the “relationships that [Wolf] described were consensual” — which is perhaps more damning than Wolf’s misunderstanding of “death recorded,” given that her argument is that these men were persecuted for their sexual preferences and did not commit physical crimes.

“The other one you offer is James Spence, a 60-year-old tutor. He committed what was described as a felonious assault on schoolboys. One of these cases you offer is a bestiality case and not a buggery case. So, I think there’s a problem here with this argument.”

Wolf responded to the career-shattering critiques of her book by saying she will correct the book with new evidence about the Silver case, but continued to insist her writing does cover consensual relationships.